Kingsville – When it comes to Kingsville, the King Ranch is king in these parts. Getting a tour of the sprawling spread or just visiting the saddle shop to breathe in the bouquet of that fine leather is what brings most folks to town. But you might get a whiff of what’s coming from across the street at Harrel’s Pharmacy. 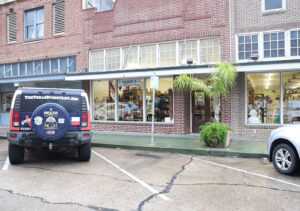 “It’s kind of like our living room almost, just lots of stuff in it,” said Nick Harrel. Nick Harrel III has two distinctions down in Kingsville. He is the third generation of Harrel’s to own this over 100-year-old drug store and he has the best handlebar mustache that he has been growing for about 45 years!  “Here in kind of some barren land and there’s not a whole lot of shade so we have to make our own, or we just grow it,” Nick joked. 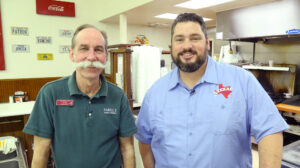 Nick’s grandfather Nick Harrel Sr. started the drug store back in 1916 and ran it for 50 years before passing it down. Nick number 3 took it over from his father in 1982, but he’s still not the longest tenured staff member! “Right now I’m up to being second in seniority around here. We have an employee that’s worked here for over fifty years…Red,” said Nick.

They call him red because he used to have bright, red orange “carrot orange” hair. Red’s real name might remind you of your favorite kid show. “My name is Oscar, like Oscar the Grouch,” joked Red.

But Red is no grouch, he really knows his stuff and since 1969, he’s been the heart and soul of Harrel’s.

“He’s a pharmacy tech. He can probably tell you were everybody in town lives… and their genealogy,” jokes Nick. 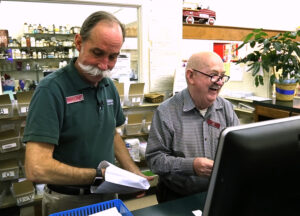 Over the past 50 years working at Harrel’s Pharmacy, Red only has to work five days a week but he sometimes still comes in just to make sure everybody is doing everything just right.  “They think I’m crazy but I said ‘Well look at all these I have worked with,” joked Red.

Working side by side with Nick, they fill folks’ medications and dispense helpful advice for a longer life.

“If you quit listening to the news you’ll be much happier,” Nick jokingly tells a customer over the phone.

While Nick and Red are a popular act, the headliner of Harrel’s is the soda shop, that’s been a hot spot for locals for a long time. “I used to walk over here with my friends from school,” explained customer Gloria Ponce. Gloria Ponce enjoys relishing in her recollections of this place with her great-granddaughter Zoe. “I feel like I won’t forget this day because I’m sitting here making memories with her and I feel like it’s gonna make her happy,” said Zoe.

Making these special memories wouldn’t be complete without a meal, and at Harrel’s you’ll wish the prescriptions had the same prices as the provisions. The menu looks like the menu you would expect to see in 1982! A delicious double meat cheeseburger will only set you back $4.50. “As long as we can have quality food, we can keep the prices down. If it doesn’t run out of business it’s not hurting us,” explained Nick. 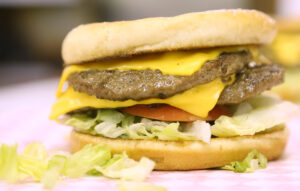 It remains important to Nick to keep a community gathering place open. So whether it’s getting a big burger and a shake from the soda shop, or getting a chance to chat with Red about his tenure at this meeting place in Kingsville, taking a stop at Harrel’s is one heck of a stop on The Texas Bucket List. “I keep telling myself I’m going to quit, but I never do… I love working with people, God has blessed me,” said Red.