Abilene – In a town known for steaks and barbeque, finding tacos that take it up a notch can be a frivolous task. But when it comes to Hispanic cuisine that takes things to a whole other level, The Local is well versed. 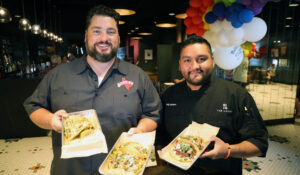 “The food is all authentic, Hispanic, west Texas style food. It’s all the flavors that you’re gonna find in everybody’s kitchen, in every Hispanic’s kitchen in town elevated,” said Gabe Stokes. Stokes is the general manager of The Local and Cody Enriquez is the head chef. We met them a few years back at the Abilene Country Club and when Gabe got hired to help create a unique place in downtown, he brought his right-hand man. “Cody is the best chef I’ve ever met so I had to bring him with me,” said Gabe.

They created this concept of taking typical tacos and turning the tortillas inside out to make something totally different. “The food we grew up eating, it’s great but how come we can’t change it?” asked Cody.

Cody wanted to show off three of his terrific tacos and the first starts off with some carefully cared for carne asada. “This carne asada is really meaningful to me because it took me three years to develop the recipe,” said Cody. 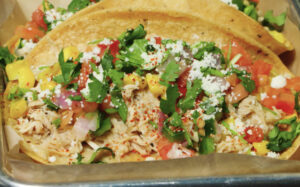 The beef is marinated for a minimum of 12 hours in an incredible smelling combination of cilantro, garlic, soy, lime juice, and cumin. But this isn’t your common cut of meat.  “Most traditional carne asada is made with skirt steak or flank steak. Well I kind of went up a little bit just coming from the fine dining cooking side so mine is made with New York Strip. So it’s a better cut of meat, it’s just like it’s more tender, it’s a better mouth feel,” Cody explains. When folks found out that Cody was using real steak, they had some questions. The steak is grilled on an open flame, and since it’s New York Strip, you can get it however you want. The steak gets wrapped up in a corn tortilla, with guacamole, pico de gallo, cilantro and cotija cheese.

Next taco up is the Ruthie taco named for dear old mom.  “It’s so close to my heart and so close to my childhood that it’s like I needed to share with the world and like give them my version of it,” expresses Cody. Shredded chicken gets placed in a corn tortilla and is topped with corn, pico de gallo, cotija cheese and tajin. 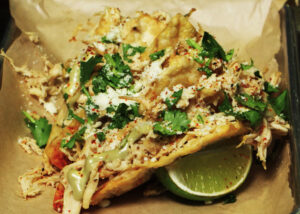 Last but certainly not least is something called a wonton taco. “The wonton taco is exactly what it sounds like, it’s a taco made with a wonton shell that came from Cody’s mad scientist brain,” explained Cody.  Cody takes a fried wonton shell, seasons it, throws some shredded chicken, homemade avocado ranch, cilantro, cotija cheese and tajin. Chopsticks or forks optional. Now it’s time to try all three tacos! 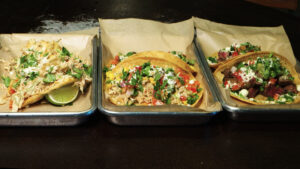 For the carne asada taco, beefy would be an understatement. The Ruthie taco had wonderfully tender chicken, with delicious pico de gallo, topped with some sweetness from the corn. The wonton taco was just as expected, shockingly delicious with the crispy and flavorful wonton. “There’s a lot of flavors going on but it all rounds up going together and creates a great dish,” said one customer.

Well if you’re looking for a culinary take on tacos, Cody is your man right here at The Local.  “If you’re going to do tacos in Texas, you got to do tacos right and I feel like we do right,” said Gabe.