Brownsville – The valley in south Texas is a tropical oasis that stretches down the Rio Grande and forms the border between the United States and Mexico. Shortly after Texas entered the union in 1845, this uniquely part of our state instigated a war that shaped our country. 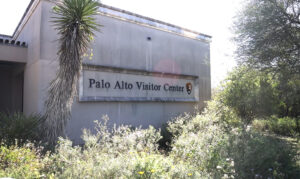 “They end up kicking off something that’s going to have monumental impacts,” explained Daniel Ibarra.

Ibarra is a Park Ranger at the Palo Alto Battlefield National Historical Park and he’s been here much longer than the amount of time the Mexican-American war took place. Danny has been working at the battlefield for 17 years, and with that time he could have fought in eight and a half Mexican American Wars! The war lasted from April 1846 to February 1848 but it all started right here in this south Texas field that only takes up about one square mile.

“This is the first official actual battle of the U.S Mexican war.” Danny states. 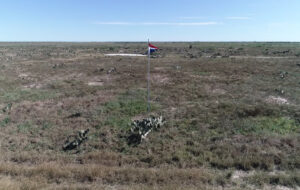 When Texas was first approached by the U.S to become part of the Union, Mexico seemed the believe that Texas’ battle for independence in 1836 was not official.

“There was an acknowledgement there that Texas did engage in battles to win its independence, but according to the Mexican government, Texas does not win its independence. According to Mexico now the Texans have a treaty that they force their leader to sign at gunpoint, which in their eyes kind of negates an involuntarily signed peace treaty.” explained Daniel.

That treaty made the Rio Grande the official border of Texas, but Mexico was sort of letting that get lost in translation. For Mexico to consider Texas being an independent country, the country wanted the Nueces river, not the Rio Grande to be the border. With President James Polk wanting to acquire the current states of California and New Mexico, Mexico did not want to sell more land without settling the Texas issue first. 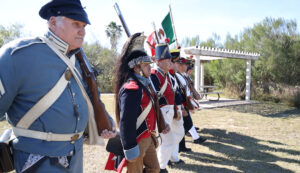 “The only way really for him to get what he wants is to send us a U.S force down to what he believes is the southern border of his new state. You know in essence kind of forced the issue,” explains Daniel.

General Zachary Taylor and his outnumbered troops arrived at the battlefield on May 8th, and if you’ve ever been down to the valley in May, it’s like June or July anywhere else in the state. Daniel tells a quote from a soldier during that time on the battlefield, “Everything either bites, stings, or has a horn on it, or a thorn.” Maybe that inspired them to fight fast. Lasting only one day, the Mexican forces fled to the river and were defeated the following day at the Battle of Resaca de la Palma. 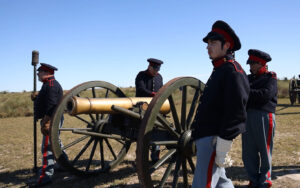 “The battle following that’s an outright defeat of the Mexican army. That one day was enough for the Mexican army to have nothing to do anymore with the U.S artillery.” said Daniel

U.S forces marched all the way to Mexico City where they took over the capitol. The U.S forces took down the Mexican flag, put up the American flag and ask again to buy California and New Mexico. Negotiations were made and you could say the rest was history. Texas and the U.S officially called the Rio Grande Texas’ southern border and the country immensely expands.

“For being a fairly short conflict, it definitely had large repercussions that continue to this day. You have the U.S double in size and Mexico loses half of its national territory,” expressed Daniel.

And it all started right here in the south Texas field.

“There’s hidden stories out there anywhere you look if you look hard enough,” said Daniel.