Wimberley – The tranquil terrain of the Texas Hill Country seems to accentuate itself on the winding roads of Wimberly. The Blanco River slowly runs over its limestone riverbed and all you can think about is finding the perfect spot to enjoy such a beautiful sight. Fortunately, we found one, simply called Yurtopia. 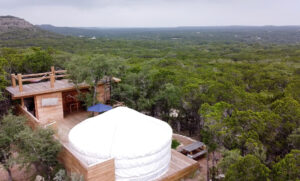 Brian Konradi and his wife Ann-Tyler are the caretakers of this paradise surrounded by the hills of central Texas, but their lodging isn’t your typical Texas-style shelter. After looking at the topography of the land and their options, the Konradi’s thought of yurts. Now you may be asking, what in the world is a yurt?  “Most people already have an idea of what a yurt is but sometimes their girlfriend or their husband or somebody has seen it on Instagram and say ‘I’m supposed to call you to book you for our anniversary, I don’t know what a yurt is but my girlfriend told me to do this.’,” joked Ann-Tyler. It turns out these tents are pretty darn romantic. 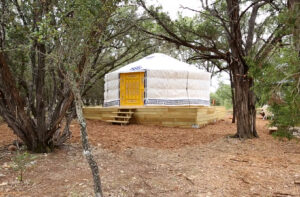 Each yurt has a name, like the Lola Ger. Lola was Brian’s grandmother’s nickname, and Ger is Mongolian for yurt. After we stepped into the yurt, it was incredible how spacious and beautifully handcrafted it really is.  “They’re all made in Mongolia, they’re made of natural materials using the Mongolian techniques and hand painted by a family in Mongolia,” explained Brian.

These dome tents are a popular form of protection from the elements for people in central Asia, mostly Mongolia of course. “All of the walls can collapse down, the rafters come out, there are no nails or screws in these rafters or the walls. The walls are all made from camel hide joints. They’re all hand hewn, you can actually see where they steamed them and bent them along the edges,” explained Brian. The entire structure of the yurt is held up by two posts called the bagon, and there is both a male and female bagon. How do you tell the difference? Well, the female bagon has a “fertility” rope that flows through it.

A lifetime of experiences traveling in Russia and along the Trans-Siberian Railway lead Brian and Ann-Tyler to putting yurts right here in the Lone Star State.  “I did a trip with a friend who was on a Habitat for Humanity trip, and we stayed in yurts there. Families that just set up summertime yurts for travelers in Kyrgyzstan and it was really amazing,” said Brian. 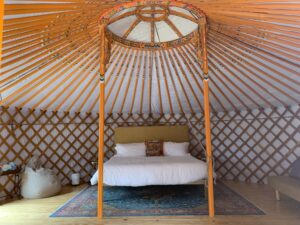 The couple is originally from Texas, Brian from Dallas and Ann-Tyler is from the Wimberley/Austin area, but when they got married in 1994, they went on a whim to Russia. “We moved to Moscow, found odd jobs and traveled all around that area,” said Brian.

Brian studied Russian in college and when Russia opened after the collapse of the Soviet Union, they saw it as an exciting opportunity. Their worldly experience played a role in constructing the crazy looking canvas structures that seem to fit in perfect with the peaceful Texas setting.  “We like the marriage or blend of Texas and the Texas Hill Country with this kind of international aspect of what’s come together with what we’ve built here at Yurtopia,” said Brian. 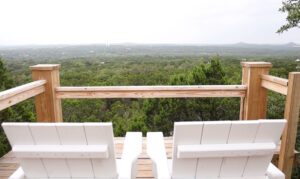 Now there’s two types of yurts here, the RiverBluff section is down by the river and is made more for the group experience. You can grab that chair and umbrella and just relax in the river, or also known as “river sitting”. “River sitting is one of our favorite things, and kind of our pastime,” said Brian. And for the more private affair, there are three yurt complexes, where you are completely to yourself, with everything you could possibly need all in one super private place. “You can come in your little sanctuary and hang out for the weekend or a couple of days during the week and never see your neighbors,” explained Ann-Tyler. 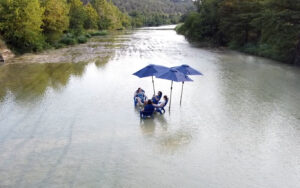 Now this little piece of heaven in the hills of Wimberly is adult-only, because keeping the utopia in Yurtopia is what this place is all about. “So we don’t have enough yurts, we can’t build too many more yurts before we’ve really done too much to what the property can handle,” explained Brian.

After a long peaceful sleep at Yurtopia, it’s safe to say that it’s truly an extraordinary stop on The Texas Bucket List, one yurt sure to enjoy. “Definitely think the Mongolians were onto something when they designed the yurt, there’s something unique and special about it and people really do wake up and say they felt like they slept differently than they have in a long time,” said Brian.