COLUMBUS, Texas — Since 1890, the Colorado County Courthouse has been sitting on this square in Columbus. Rich with Texas history, the town can trace its roots to the Old Three Hundred and stories of Sam Houston and Santa Anna are common place here.  So it’s no wonder why you’ll find a museum dedicated to…..does this really say Santa Clause? 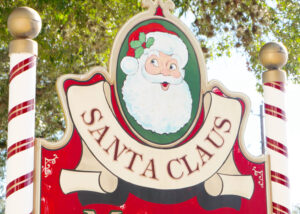 Mary Anne Picken’s family has been in these parts since the 1830s but it’s her mother’s old collection of father Christmas that creates a constant holiday commotion. Mary Elizabeth Hopkins didn’t start her Santa collection until later in life but once she had the bug for the big man, it couldn’t be controlled.

“This is the one that started it all,” Mary Anne said. “She saw him in 1974 and he was an antique then. They think he was built in the 1920s. She was fascinated because he had one red eye and one green eye. It is a scary looking Santa. I’m not sure what the fascination was.”

The museum has been here since 1990 and was opened in honor of the local lady who loved Saint Nick. 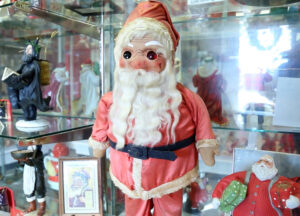 Santa bells, Santa Slides, even Santa wine the collection is quite copious.

The collection puts you in a festive mood but for Mary Anne it’s much more than that.  It’s memories of mother, of good times with her family and friends, a ghost of Christmas past that keeps reminding her to celebrate the season and Santa all year long.

“I wear this pin to remember my mother. … All of my children, eight grandchildren, have all grown up since she died,” Mary Anne said. “It’s kind of interesting to have been kind of connect with one little part of her.” 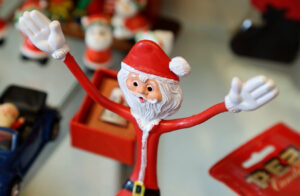 While the Santa Clause Museum in Columbus isn’t the most hard hitting historical hideaway in the Lone Star State, it might have the most heart and the power to inspire the spirit of giving in way only Santa can do.