Houston – With nearly 100 years of history, the Houston Zoo is a popular stop throughout the year thanks to their massive amount of massive animals.  But when it comes to Christmas, there’s no shortage of raging and roaring holiday spirit.  “The music and the sights and the lights and the snacks, it’s Christmas time here, for sure,” said Lauren Wappler. 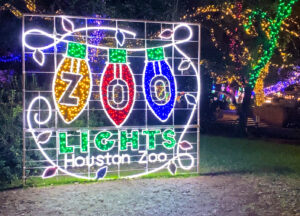 Lauren Wappler has worked at the Houston Zoo for nearly as long as the Zoo Lights have lit up the holiday season in Houston. “It’s been a fun nine years, we’ve evolved a lot,” expressed Lauren.

With so much to see here from dragons, a talking Zebra, to some extremely long light tunnels, the display starts going up in September and takes over two months to complete. “The crew is, I mean, they work fast. They’re very diligent. It’s a lot of work, but they do a great job,” stated Lauren.

When the Zoo started this annual tradition in 2011, they weren’t quite sure what to expect. “We thought, ‘Hey, let’s kind of flip the zoo and let’s do a nighttime thing’,” said Lauren. 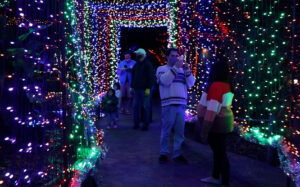 We still had one question about the lights at the zoo, what about the animals? “Some of them like them. Some of them couldn’t care less. They go into their barns or their night houses for the night and they’re sleeping throughout the whole thing,” explained Lauren. “I was kind of hoping penguins or something would be out, but I mean, I’ll probably be back,” joked visitor Robert Boss. “The Zoo Lights, it’s not so much about the animals. It’s more so about the lights, though you may or may not see a giraffe or rhino walking around their yard while you’re here,” stated Lauren. “You can smell them. They’re in the background. So we’re good. We know they’re there. You can hear them occasionally,” explained visitor Tim Harrison.

While the animals might not be the stars of the show of the Houston Zoo at night, they are still attended to as normal, or maybe a little more than during the day. “Being a zoo, animal welfare is very top of our priority. So we have animal team staff members who come out throughout the night and make sure that our animals aren’t bothered by it. So we work hand in hand with our animal team to make sure the volume is not too loud, that the lights are set up in a way that won’t disturb the animals too much. So you will see some dark areas and that’s because the animals live there and they don’t really want to see the lights all night long,” explained Lauren. 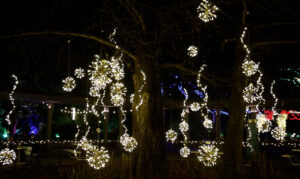 Two legged creatures are way more into the array of lights. “They’re great. They’re beautiful. This is our annual tradition with our family. So this is our third or fourth year coming. We love it. They’re great,” expressed visitor Tracy Smithson. “It’s great that the city and the Houston Zoo can put this on for everyone,” said visitor Joel Garza. “We love being able to be that place where you can come bring your family and just have a really safe, really fun night together,” stated Lauren.

The dancing oak trees at the entrance of the zoo is just one of the popular stops. “When you first walk in and have the big oak trees full of light flashing with the music going, that’s pretty awesome,” said Tracy Smithson.

Considering this is a time of year where peace, love and joy are prevalent in our hearts, it’s fitting there’s a tree just for that and it really pulls out the passion in people.  “We’ve had quite a few proposals happen at that tree. So if anyone’s looking to make that forever moment happen, Zoo Lights is a great spot to get down on one knee in front of some really pretty lights and pop the question,” said Lauren. “Kind of gets me motivated to do my own Christmas lights. I can’t compete, but it gets me in the mood, so,” joked Tim Harrison. 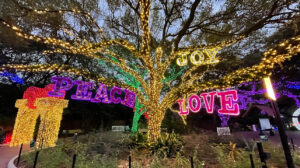 Of course the ways things are this Christmas season, you can expect a much smaller crowd and tickets must be pre-purchased. “It will be a little more enjoyable, not as many people crowding you around and have some space to spread out, social distance and kind of just be able to stroll a little bit more versus following the herd,” explained Lauren. “Masked up families, still better than nothing. We’re fortunate and blessed. You’ve got to celebrate it,” stated Tim Harrison.

So show your pride in holiday cheer by bringing your pride to the Christmas display that all creatures crazy about Christmas will enjoy. “It’s unique. Where else can you go to the zoo and see Christmas lights,” said Lauren. “The Houston Zoo does an outstanding job every single year. They keep some things the same, but they always change something so it’s a different experience. And it’s just something you have to add to your holiday bucket list,” said Tracy Smithson.