The Texas Bucket List – Trumpy The Longhorn in Dickinson

Dickinson – Down in Dickinson, Kristy Walker is well known for her unique baby dolls she creates. Every day she meticulously works on the detailed dollies that help people with Alzheimer’s or provide comfort to those with down syndrome.  “Well, it’s about 15 layers of paint to bring up the process to make it look like realistic skin. The hair is hand-rooted, just they’re weighted to feel like a real baby,” explained Kristy. 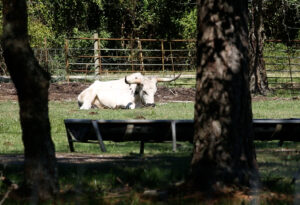 Since she works from home, she’s able to step outside her home in the country and take in some fresh air when the time arises. “It’s a very busy, time-consuming, stressful job, and coming out here is kind of my escape from it,” said Kristy.

But when she does withdrawal to the wood, she’s got a friend waiting for her. Trumpy, the most loving Longhorn in the Lone Star State waits patiently for Kristy by the fence for her to come see him. Trumpy shares a pen with another Longhorn named Obama and I’m sure at this point you can see where this is headed. “They’re brothers from another mother, but they have hung together, and they have grown up together. Although, Trumpy is not very nice to him. He doesn’t let him get treats. He pushes them out of the way,” said Kristy. 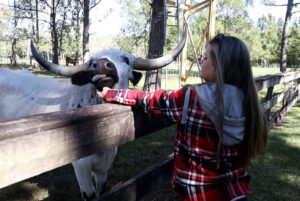 But not to worry. “We are a politic-free pasture,” stated Kristy. For someone who doesn’t want to make this about politics, why are they named after politicians?  “Well, because they came right at the election time and their names suited them. Trumpy with his tuft of hair up here. We just said Trumpy and Bammy, and it stuck. The names stuck,” explained Kristy.

But Trumpy has a bit bigger personality and an ample appetite.  Yes, you’re witnessing what may be the only longhorn in the land to lick a little ice cream. “I got a lot of people that said this is cannibalism. It is not cannibalism, it’s recycling,” said Kristy. “There’s just something about him. There’s just a connection that I have with him that I haven’t had with any of these other cows, and he just kind of demands attention,” expressed Kristy. 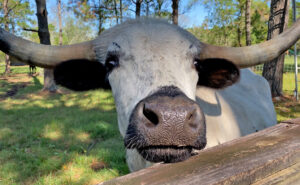 Kristy decided to share her unique relationship status on Facebook and created a page just for Trumpy. As you can imagine, it’s taken social media by the horns. Turns out Trumpy’s tastebuds go for all sorts of sweet treats, especially donuts. “Give him carbs, he’ll smile and love you,” joked Kristy.

The Facebook posts don’t center around sweets, Trumpy is pretty much into any kind of food you’re will to put out to pasture, for the most part. “Taco shells, chips, doughnuts, cookies, tortillas, loves a tortilla. If you’ve got leftover celery, keep on walking,” joked Kristy. 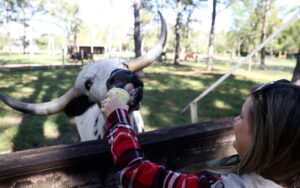 Kristy keeps up her special bond with Trumpy because it helps people make it through some terrible times.  While visiting Trumpy isn’t in the cards, you can follow him on Facebook and cracking a smile from something as silly as Longhorn licking ice cream is always well worth a stop. “They’re so tired of all the negative stuff on Facebook. They open their Facebook and they’re scrolling past all the news and negative things, and they get to a smiling picture of him eating a piece of candy and they’re like, ‘Yay!’. It’s just spreading joy and happiness and silliness. If I make one person smile, I’ve done my job,” expressed Kristy.