The Texas Bucket List – The Dinosaur Park in Cedar Creek

Cedar Creek – Driving along Highway 71 between Austin and Bastrop, you never know what’s lurking in the central Texas trees.  Most of the time you’ll find picturesque Texas landscapes but if you turn on the other side of the road, you won’t find Lost Pines, you’ll find a lost world called The Dinosaur Park. 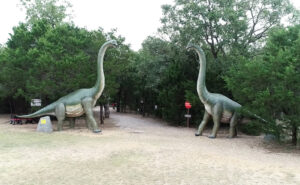 Austin Nunez and his family run the park and they are crazy about the Cretaceous period, so they created this place to see preposterously sized prehistoric creatures.  Since 2004, the Dinosaur Park has been showcasing what the world was like, when dinosaurs roamed the Earth. “A very niche thing. I don’t know exactly what to call it all the time. It’s like an outdoor museum, we like to say,” said Austin.

On a short half mile hike through the hill country, you’ll come across 30 dinosaurs and you never know when one’s going to pop up on you.  “This [velociraptor] is our first dinosaur on the trail, and this is what it actually looked like. The ones in Jurassic Park were made a lot bigger, a lot more robust just to up the scare factor. He had sharp teeth, sharp claws, and he did have those things, the sickle claw that you do see in Jurassic Park,” explained Austin. 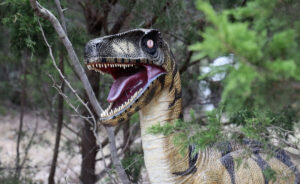 “They’re [dinosaur statues] from all over the world. It’s basically like we’ve had local artists do some, we’ve had international, we’ve had whoever will do them. It’s actually quite difficult to find artists who will do some of the larger ones. The smaller ones are generally easier. People are willing to do a six-foot, eight-foot dinosaur statue, and then you’ll see later on the trail there’s 40-foot, 100-foot dinosaurs out there that we have to just find whoever will do them for the best price,” explained Austin.

Some of the dinosaurs were even natives to the Lone Star State! “You’ll notice it [statue description] has our little Texas symbol. Those are for the dinosaurs that lived in our state, the creatures that were found here,” said Austin. 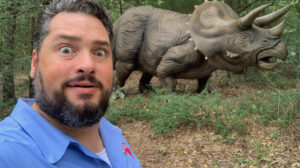 It seems thinking about the 66 million years since dinosaurs last roamed the earth has made me hungry but just like any good ole’ amusement park, you ‘ll have to pass through the gauntlet that is the gift shop to get “Yeah. Anything dinosaur that is sold, we try and sell it,” said Austin. 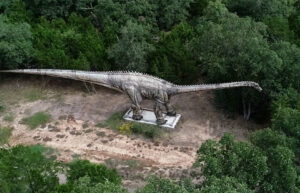 Well we’re sold on the Dinosaur Park being the perfect stop for your fossil loving family on The Texas Bucket List.

What is it about dinosaurs? Why are we so enamored by them and so curious about them from a young, age? “It’s probably just because they’re so different to what we have in terms of real animals. The closest thing we have is crocodiles or birds, and even those, there are some dinosaurs like T-Rex that doesn’t look like any crocodile or any bird out there. Same thing with the long-necks or the Triceratops. There’s just general fascination that I’ve seen with them that just… I can’t really explain it myself even,” explained Austin.