The Texas Bucket List – The Gypsy Joynt in Galveston

Galveston – There’s nothing like life on the island and when you stop by a particular restaurant on the outskirts of the strand, it seems out of place but it actually fits right in. Jordan Weller family owns the Gypsy Joint. He was born up the road in Webster, his Willie Nelson like hair came later in life, around the time his entire family decided to pack up and roam the northeastern part of the country, but they returned in 2016 to open up the Gypsy Joynt. 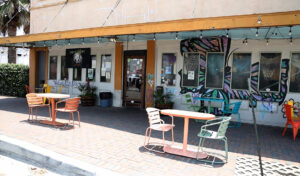 “My mom was home with us and cooking every day and always feeding other families you know, and people go nuts for her cooking. So, one day my dad said ‘You know we need to make some money on this.’,” explains Jordan.

Their first restaurant was in North Carolina and after years of success, something called them back to the Lone Star State. So the entire family came back and now you’ll find all of them, and I do mean all of them, working together on some seriously localized craft cuisine.

“My wife does the baking with my mom, my younger sister does the baking and a lot of the prep work, I do all of the meats, then my dad’s on the line cooking, we’ve got an older sister running the front,” Jordan explains.

The Weller’s feel like peas in a pod in this particular predicament and this restaurant’s success can be attributed to, you guessed it, dear old mom. 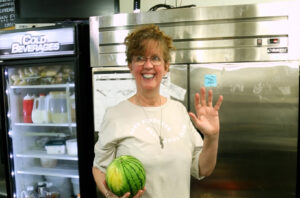 “It’s different than a lot of things you’ve probably had before, a lot of different ways to prepare familiar recipes, it’s just you know very unique,” said one customer.

There is no doubt that the mom is the key to the restaurant’s success. Jordan’s dad, Keith, is one far out father figure who’s got a fine nickname. “They call me Poppy,” said Keith.

But he did want to clear up one misconception. “A lot of people think we’re real gypsies or we’ve had people asking if we’re from Romania and it’s not that,” said Keith. They’re just a really close family!

“We’ve been doing this for nearly 20 years and we’ve raised our kids in the restaurant so you know I’m with my wife, my kids, my grandkids, my in-laws, and so forth at all times all day every day, and I can’t think of anything better in life… I’m blessed to be able to do it,” expressed Keith. 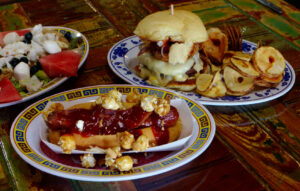 Poppy put together three plates that are pretty unprecedented. First a fine sort of salad with lump crab meat, some fried green tomatoes, watermelon, fresh mozzarella balls and blueberries. The salad was very fresh and light tasting, then the sauce gave it extra little flavor. Then a two-meat burger topped with Muenster cheese, onions, and this too has fried green tomatoes. Don’t forget the lump gram and the yosenabe sauce, sort of their take on sriracha sauce. The beef kicks your taste buds off with a nice spice, the flavors of the crab meat are delicious and the sauce takes it over the edge. Finally, things get crazy with a uniquely named hot dog. 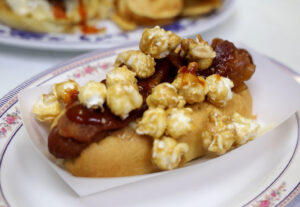 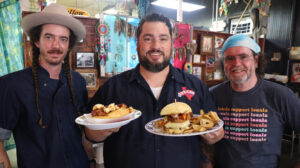 So if you’re looking for something nice and light on the island or a big burger topped with crab, or something that just really hits the spot, the Gypsy Joynt on Galveston Island is well worth a stop on the Texas Bucket List!

“You’re not going to find anything like it anywhere else, not even Austin,” joked Jordan.