Conroe – On the east side of Conroe, you’ll come across a mundane mechanic’s garage.  Monday through Friday, you’ll find you regular guys working on everyday cars but what they’re doing could be considered miraculous. 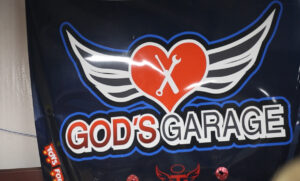 “We have several volunteers that are retired, but we have a lot of guys that they just take their personal time to come up here and work on cars,” said Brad Thompson, the Board Director for God’s Garage.

“This is one of the neatest things I think I’ve ever been involved with,” expressed Brad.

He helps in the handiwork of this heavenly repair shop. “We’re all just stewards of this. We get an opportunity for a period of time to serve in this role. And we’re going to do the best we can to move it forward. But in the end, God’s got this ministry. It’s not ours,” said Brad. 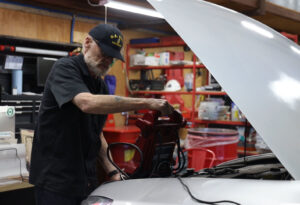 Now God’s Garage isn’t just using the almighty as an advertising ploy. They are literally performing miracles by tuning up and turning out tons of cars for those who need it most.  Widows, single mom’s, and wives of deployed military members.

“These moms, they need a car. They needed to be safe. We have a certified mechanic that verifies that everything we put on the road is completely safe. We do this because we know that they’re vulnerable when it comes to getting their car worked on or get it repaired or being told what needs to be done. So we know that it’s a big relief of stress to them. And it’s really where the heart of the ministry started and we just haven’t deviated off of it,” explained Brad.

God’ Garage got started in 2011 after a simple act of kindness. “Our founder, who is a youth pastor, a longtime pastor, had a heart for fixing vehicles, was a car guy, and he was on his way home from church over on the other side of Montgomery and saw this lady walking in the rain down 105 in the dark with her child. And he stopped and said, ‘What are you doing out here? It’s not safe.’ And she’s like, ‘Well, I can’t afford to get my vehicle fixed.’,” said Brad. 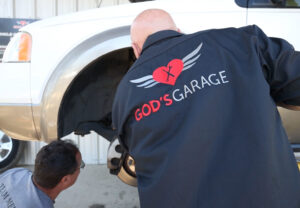 Repairing that one vehicle turned into a mission. A mission from God. “We can fix a lot of this stuff ourselves. We got a bunch of guys at the church that know what they’re doing. Let’s fix them ourselves,” stated Brad.

It wasn’t long until God’s Garage started going above and beyond repairs and started giving away vehicles. “It’s amazing to see the difference it makes in somebody’s life. When you can give them a vehicle, it enables them to really then start living a life that’s more fruitful and productive. They spend so much time and energy just trying to get around. It’s unbelievable,” said Brad.

“When you’re going through things, you think there’s people that don’t care. And there is,” expressed Lucy Wilson. Lucy is a recipient of one the divine drivers and the people that are most impressed are her kids. “They’re able to have a smile on their face because the other car, we didn’t know if we were going to go somewhere and it wouldn’t start no more, so it’s really awesome. It’s really awesome,” said Lucy. 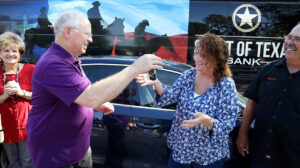 “Unfortunately, for whatever reason, they land into circumstance. And if you think about how hard it would be to hold a job if you can’t get to the job. And most of these women have kids, two to three kids, so if you think about every woman we impact, there’s two to three kids that their life’s instantly better because now their mom can go to the store, can go to the doctor, can take them places,” explained Brad.

But it’s not just a means of transportation that God’ Garage is giving away, it’s also a few life lessons on how to get through this crazy thing called life. “We try to not only give them a car to kind of be a bridge for them for a better life, but we also try to teach them some skills that more than likely they’re missing and would really help them get a job, write a resume, dress for their resume, nutrition, financial management, a bunch of stuff that the rest of us maybe had somebody in our life that was a mentor that taught us how to do those things. These ladies, a lot of times don’t have that. So they all go through a class to do that,” explained Brad.

“I never expected to get the help that I have gotten with God’s Garage because without them, I wouldn’t know right now how I would be able to go to work, support my family and my children, so,” expressed Lucy.

Cars get cranked out of here with 150 repairs and 150 giveaways happening each year. Despite the constant turning over of vehicles, handing over the keys to a new lease on life never gets old. “It’s always hard to even just maintain your composure through the giveaway because we know what a difference it makes,” said Brad.

While God’s Garage isn’t your typical type of place we put on The Texas Bucket List, showcasing the folks that make Texas what it is always is well worth a stop.  People that take care of their fellow Texans to get them on the road to a righteous path. “We’re going to do the best we can to kind of keep this going and make it as impactful as possible. And there’s not a better place to serve than to do what we do,” said Brad.

“I know that God has blessed me and has blessed a lot of women that needed cars through them because without God’s Garage, there’s no way that a lot of them would be able to get back on their feet,” expressed Lucy.