Livingston – The 50’s spirit is alive and well inside the Pit Row Pit Stop on the east side of Livingstone. “The service is good, the food is good, and the owner is great,” said customer Wayne Woods. 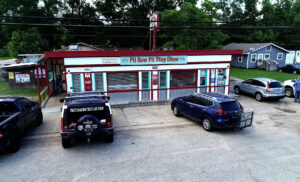 “I’m old school, just like my old truck out there,” joked owner Frankie Vinci. Frankie is known for his fine burgers and fries at this fine establishment that’s fond of the fabulous fifties.  There’s also the famous seven scoop sundae!  But surprisingly enough, they’re actually known for something else. “It’s the best ribs you can get anywhere,:” said customer Bruce Horton. “Everyone says that they’re the best that they’ve ever eaten, the best I’ve ever eaten,” said customer Holly Scott. 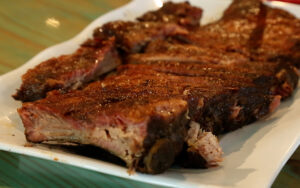 Not exactly what you’d expect from a guy who was born in Brooklyn and grew up in California. “I didn’t know a thing about brisket four years ago. I just cooked a couple of briskets and 12 racks of ribs just to see if they liked it. And now I do 1200 to 1500 pounds of brisket a week and we sell 400 to 450 racks of ribs a week. Besides the diner food,” explained Frankie.

The former carpenter used to build theme parks but decided to build a restaurant when he moved to Texas in 2014. “I thought that it would be really cool to build a diner. I ain’t never known nothing about a restaurant before. Let me tell you something, bud. My first six months here was a train wreck. I knew nothing about the restaurant business,” explained Frankie. “A little baptism by fire when it came to this,” I responded.  “I had a baptism by fire in prison,” stated Frankie. Not the turn we were expecting either. It turns out Frankie has a bit of a past but if it wasn’t the spirit of the fifties that saved him, it was a much higher calling. 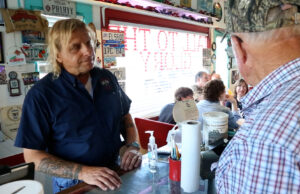 “Some drug dealers hurt a little person in my family, little girl. And I went and made them pay for it. They put me away. I did 10 years. First off, I turned my life over to the Lord and 50 years came off my sentence. A chaplain walked me to the Lord and I surrendered my life,” expressed Frankie. Today Frankie continues to walk the righteous path, not just with really good ribs but with a care for the community and by providing an outreach for believers and those in need.

“He looks into the future so much. And how many people he’s helped. Some of his people are recovering alcoholics and all, and he gives him a job and he tries to help him straighten out. He’s a good guy. He really is,” said Doug Marchese. 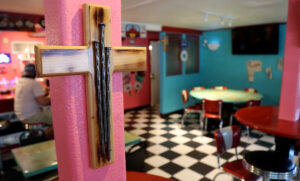 “I go to the prison as a ministry and try to get the guys to see a different side of life instead of the revolving door. Walking back into a prison after being free from one, first two or three times I thought, what am I doing? But the foreboding look on their face, you smell the smells, you see the razor wire. But I got past that, and there’s a reason to be there. To get people to see that every single one of us has a purpose and a gift. It all comes from the Lord. And if we use that light, we won’t be involved in all that mess. And I enjoy doing that. I do,” expressed Frankie.

While his ribs may be a religious experience, hearing Frankie’s testimony and seeing his care for the community is what makes the Pit Row Pit Stop the perfect pit stop on The Texas Bucket List. 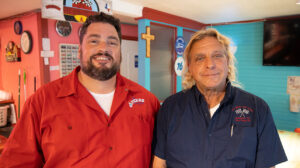 “Frankie is very very blessed, and the reason his business is so good is because he gives almighty God the credit,” said Wayne.

“This place is all to the glory of God. It is. And the community is a blessing for me. So I’m glad to be here,” said Frankie.