Utopia – An hour and half west of San Antonio, smack dab in the middle of some of the most serene landscapes of Texas is Utopia.  And for locals, that’s exactly what it is. “Just great people, and everyone takes care of each other,” said resident Tabitha Bomer. 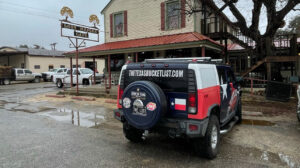 “You have to want to come to Utopia, because it’s not on the way to anywhere except Garner State Park or Lost Maples Park,” stated Tacy Redden, owner of the Lost Maples Café.

Tacy has deep roots in Utopia. “My dad was actually from Oasis, Canyon, which is a couple of canyons over, but my mother was raised right here,” said Tacy.

The Lost Maples Café is a restaurant with a really long history.  Built in 1907 as a Mason’s Lodge, it was turned into a café in the 1940s, Tacy took over in the 80’s. “We had the grocery store, and we also had a little meat plant, and he decided the cafe would go really good with our grocery store and meat plant. His aunt was going to come and run the cafe for us and teach me how to run the cafe. So if you know cafe business, you know what happened the first day. She didn’t show up,” explained Tacy. 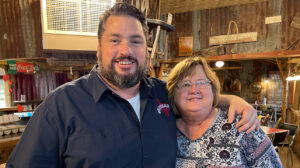 Tacy had to learn on the fly and it didn’t take long to figure out that people here like comfort food, especially burgers and pies. “The pies are outstanding,” stated customer Cobey Keith. “Our buttermilk pie is something that everybody should come try once,” said Tacy.

But there’s another dish here that’s been on my radar thanks to its really good reputation.  The Lamb Sliders. “Lamb, yeah. No, not doing the lamb. A lot of people like it though,” “The locals don’t like them, but everybody else does,” said Tacy. 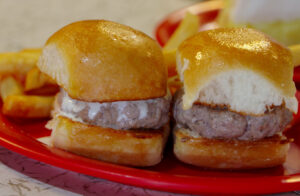 “We hear all the locals haven’t tried them,” joked head cook Johnnie Sue. Johnnie Sue cooked us up an order of the little lamb sliders.

This dish starts off with lamb raised right here in Utopia by Tacy herself. “They do. We raised them. So it’s farm to fork, as they say. It’s our own product,” stated Tacy.

Once the lamb is grilled up, it’s but on a sourdough bun with yogurt sauce. Well, this is by far one of the simplest dishes we’ve ever done. Meat, bread, sauce.

The delicate lamb sliders were ready for the taking and after one bite, I could tell the sliders have a nice clean finish. The wonderful taste of lamb mixed in with that feta and that seasoning and that yogurt sauce, is such a nice flavor. “I think we just call it South Texas lamb,” joked Tacy. I don’t know if this little lamb’s fleece was white, but its meat sure is tasty! 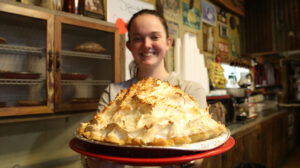 “It’s a unique experience. It really is. And the food is good,” said long time customer Paul Goodnight. You’d think the one thing that would be safe in Utopia is a little lamb, but apparently not! “It’s good homemade food,” stated Johnnie Sue.

And, of course, we have to finish things off with a piece of pie. Go with the buttermilk.

So if you’re looking for a unique dish in a unique part of our state, coming to the Los Maples Cafe in Utopia for the lamb sliders is definitely well worth a stop on The Texas Bucket List.