The Texas Bucket List – Pint and Barrel Drafthouse in Palestine

Palestine – Over in picturesque Palestine of all places, there’s a pub with some serious sandwiches called the Pint and Barrel Drafthouse. “A lot of people told us we were crazy, but then they can’t imagine the town without us, now,” stated owner Chris Keller. 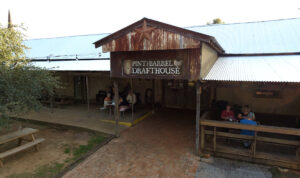 Chris is the crazy man behind the Pint and Barrel Drafthouse in the old town part of Palestine and his place is pretty unique. “It was built as a garage for the Palestine Electric Company, so it’s a garage, it was a barn, and we’ve managed to de-barn it a little bit, but it’s still pretty barn-y,” joked Chris.

Chris moved to Palestine to pour his soul into this watering hole found by his father-in-law a few years back. “He sent me a text of this building, for the picture of this building, and said, ‘Hey, you want to put a pub here?’ Why is this not a pub,” explained Chris. After years of searching for the perfect place, this nearly 100-year-old building turned out to be the perfect place for a plethora of pints.

Chris has had a fondness for frothy beer his whole life and has worked from the sales side to even brewing beer at St. Arnold’s in Houston. “Still, after running the business for almost seven years. Yeah, brewing was the hardest thing I’ve ever done. It’s a lot of physical labor and I mean, imagine doing a triathlon and having to stop in the middle of it and do math, right,” said Chris. 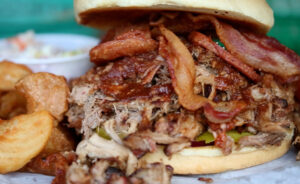 Now he gets to enjoy a cold beer amongst the trees of east Texas while surrounded by at least half a dozen churches within half a mile of his place. “There are a lot of churches in this town.” That church right there, actually, I had to measure my front door to, and we had an extra 20 feet.” Just to make sure. But, come to find out, the pastor, I met him actually at the bar, he was sitting with his wife up there at the bar,” explained Chris. Fortunately, the faithful and found a place of fellowship at their friendly neighborhood pub.“We went to the Church, and all throughout the pews were our regulars, and I’m like, ‘Oh, I know you people. That’s great.’ I didn’t have to meet very many people for the first time going over there because I already know them,” joked Chris.

Now it seems Chris knows just about everybody in town. “We’ve become the living room of the town, really this is exactly what a pub needs to be, a place for the public to come up here and meet and talk,” stated Chris.

But then there’s the food and that’s what takes the Pint and Barrel to a whole new place. “I’ve never had anything that was bad here,” customer Dollinda Toole. 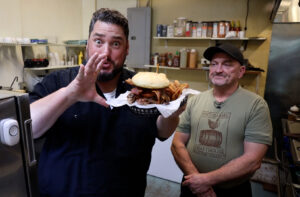 Now the reason the food is so fine here has to do with head chef Scotty Mick. “Whatever Scott wants to do, I’m like, “Just tell me how much it costs, so I know how much to charge, that’s all I’m going to say,” said Chris. “I love to cook and please people, and feed people, and make peoples’ bellies happy,” stated Scotty.

Scotty wanted to feature two of his famous dishes, the Green Grilled Cheese and Three Little Piggy. “You got to get yourself a three piggy. That’s our pulled pork sandwich, with fried spam and bacon,” stated Chris.

Scotty first cooked up the green grilled cheese by toasting two pieces of sweet sourdough bread, spreading on some mayo while adding muenster cheese, onions and tomatoes.  On top of that is their house made spinach and artichoke dip. That’s covered with provolone and allowed to melt all together. “You just want a real good melt on that cheese, you want it all to ooze out of it,” said Scotty while heating up the sandwich.

Then it’s time for the Three Little Piggy. While toasting the buns, Scotty busts out the pork he’s proud of. “This is my baby right here. I smoke usually every day, except Mondays and Tuesdays. So, what we’re going to do is, basically put a nice, healthy amount of meat on the sandwich.”  That heap of meat ended up being nearly three quarters of a pound! 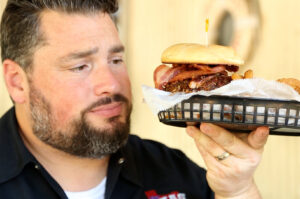 After warming up a preposterous amount of pork, Scotty starts slamming the sammich together. “We’re going to shoot a little bit of this, this is my world-famous secret barbecue sauce that I make almost daily. Nobody even knows, not even my wife knows the recipe on this,” joked Scotty.

Then comes the fried Spam. And that’s topped with three pieces of bacon. “That’s the three piggy, and that’s what you’ll get when you come here, you will get that sandwich exactly like you see it right there,” said Scotty.

Well, we obviously have a preposterous amount of food here in Palestine, and we’re going to start with a smaller offering, the green grilled cheese. Looking so nice and quaint next to that big old pork sandwich, but this is not lacking in any flavor.  “Something totally different that I’ve never had before, and the soup that goes with it. It’s to die for,” said customer Dollinda Toole

Onto the star of the show, The Three Piggy. Well, I’ve got the perfect escape hatch, my mouth. So many different textures when you bite into that sandwich, the pulled pork, nice and soft, the spam, a little grilled, and then that crunchy bacon. That is the most ridiculous pulled pork sandwich I’ve ever seen or eaten. “I can’t do the three piggy, that would take me like a week to eat,” said Dollinda. “I like their sauce, and it’s just really slow cooked, it’s tender and juicy and melts in your mouth,” said customer Sheila Staples.

Well, after you have The Three Little Piggy, you’ll definitely huff and puff, you’re not going to blow any houses down either.

“It’s in Palestine, it’s a small community, you just have to come, you have to experience it,” said Kay.