The Texas Bucket List – All Star Bar-B-Q in Rusk

Rusk – Tuesday through Saturday, Russell Turner spends a lot of time serving up some savory smoked meats. He’s the proud owner of All Star Bar-B-Q in Rusk and behind the pines, you can smell his brisket and sausage getting served up five days a week.  “It’s a good, honest way to make a living. And it’s Texas,” said owner Turner.

Since 1993 All Star has been a reliable restaurant in Rusk and while the BBQ is good, what brings in the crowd is his collection. “My whole idea all these years was to put stuff in here for people to just look at and enjoy while they’re eating barbecue,” stated Russell. 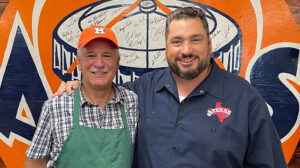 Russell is a big fan of Houston’s professional baseball team, hence the reason he has an astronomical amount of Astros gear in his restaurant. “I’m an Astro guy, I always have been. I said, ‘Why don’t I start putting Astro stuff up?’, and it took off,” said Russell. “I don’t think it ever quite got to be an obsession, borderline. I have a problem, my wife says,” joked Russell.

From tins to toy cars, it’s hard to tell if All Star Bar-B-Q is a restaurant or a really cool museum. “Shot glasses, commemorative baseballs, all the playoffs, baseball games, a few beer taps. I think it’s good for baseball to sell stuff like that. I mean, it just brings it closer in to the people. They can actually see it and touch it.”  He even has a game used base! “We don’t discuss price,” joked Russell while walking us through his collection. 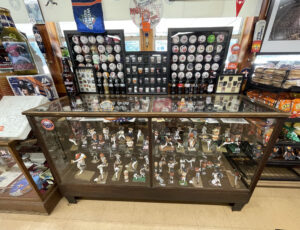 Russel’s got hung up on Houston baseball as boy when his father took him to games back when they were still known as the Colt 45’s. “I just thought it was the coolest thing ever. They were building, of course, the Astrodome across the parking lot. You could see this big frame made of steel,” said Russell.

“The year the Dome opened was amazing. We did get to go the first year. We had already heard the word that you bring a sweater with you because it was going to be cool. So, it was a wow when you walked in, of course. Isn’t that something? Because they were showing off their air conditioning. They had it cranked down to like 63, probably,” explained Russell.

Conversations in most Texas BBQ joints center around BBQ.  But here, you can’t help but talk baseball. Even in the middle of an interview Russell started talking to a fellow fan! The much bigger debate in these parts might be which Texas baseball team you’re supporting. “The Mason-Dixon Line of Astros and Rangers right here in Rusk. Used to, the Astros’ line stopped at Lufkin 40 miles south, but I’ve been able to move it up to here, and then Rangers to the north, so we’re advancing. If the Astros would just let me help them market just a little, we’ll take over the whole third of this Eastern part of the state. No problem,” explained Russell. 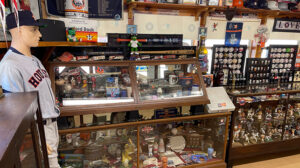 Russel is definitely doing his part. “Most of my Ranger fans have learned that we serve them at the to-go window. So,” joked Russell.

“Most people get a kick out of it. Because again, it’s just tied into the decorations, to give the customer something to do, something to look at. Can you not look at a baseball card and have to flip it over? You have to,” explained Russell.

The centerpiece to his collection, a hand painted Astros sign that hung in the outfield of Veterans Stadium in Philadelphia that happens to be signed by the whole ’91 squad. “Most people when they come in here and they do, “Hey, would you mind taking our picture?” it’s usually in front of this.” In front of this? “Yeah. So, it’s a good backdrop,” said Russell. 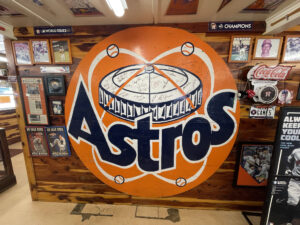 Surprisingly this sign isn’t the most coveted piece in Russel’s collection. “Somebody said, ‘Well, if this place caught on fire, what would you grab?’ My son and I went to Wrigley Field to watch the Astros play, and I’ve got the lineup card for the dugout the day we were there. And I got a picture of us sitting there with Wrigley in the background and I have it framed over there by my desk. I’d probably grab that,” said Russell.

Baseball. There’s just something about it that brings families together. “Grandkids and grandfathers, those are the ones who seem to appreciate baseball the most. Maybe I just say that because I’m a grandfather now. I don’t know,” Russell said.

So if you’re a fan of the right Texas team, a stop at All Star Bar-B-Q in Rusk is right up your alley and well worth a stop on The Texas Bucket List!