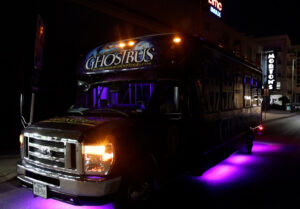 San Antonio – When the sun sets on San Antonio, the city seems to take on a whole new perspective. Sights that seem ordinary during the day all of a sudden get sort of spooky. Maybe that’s because these places have a story to tell, and the folks at Sisters Grimm Ghost Tours are happy to haunt your dreams.

“Spirits reside in this great city,” said James Schwartz.  Schwartz married one of the original Sisters Grimm, his wife Lauren. Lauren and her sister run this San Antonio tour, dedicated to the stories from the other side since in 2011.  “We always loved doing ghost tours, we’ve been to ghost tours throughout the country and we decided, ‘San Antonio doesn’t really have a true and authentic ghost tour,” explained James.

James had a premonition that joining in on the apparition operation wouldn’t be a horrifying profession. “I figured that this was a lot more fun than working with living people, I’d rather work with dead people,” joked James.

Whether it’s walking the streets hearing spooky stories or going for a spin in a seriously spooky set of wheels, you’ll never know what you’ll hear on this haunted tour. “Ghost stories can be embellished at times, especially from the aspect of the person that is telling the ghost story, they feel different things, and a little game of telephone along and stories change over time, but all of the history is true,” explained James. 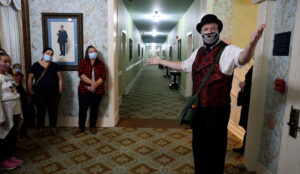 But all the bumps in the night are heart at the historic Menger Hotel, where ghost sightings are often seen in pictures. “We have 36 known spirits that haunt the Menger Hotel. We have spirits such as Sally White, one of the chambermaids of the hotel, killed just outside the hotel, we have Teddy Roosevelt, he haunts the Menger bar, and then we have Captain Richard King of the King Ranch, who died right upstairs in the hotel,” explained James.

Before you can get too comfy in the hotel, you’ll head to historic buildings around town like the Spanish governor’s palace, and the old Bexar County Jail which now happens to be a hotel. “You know I have felt things, I have heard things, I’ve actually thought I’ve seen things but if we had promised seeing ghosts on our tour, we’d probably be charging a little bit more for admission,” joked James.

As if all of this isn’t creepy enough, you’ll end the evening on the east side of town at the historic cemetery consisting of 103 acres of prominent permanent residents. “Just visiting all the founders of our city, the prominent people such as Mr. Menger who built the beautiful hotel, he’s at eastside cemetery district, Carl Gunther of Pioneer Flower Mill, there’s just so many great stories of these people that have passed on. And a lot of people don’t know that they’re buried here, they don’t know their past, they don’t know what makes San Antonio San Antonio, so it’s great to share the cemetery with folks,” explained James. 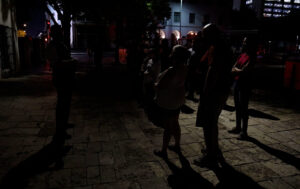 While the Sisters Grimm Ghost Tour can definitely make you shake in your boots, in the end it comes from the history of the Lone Star State. And who doesn’t like a tall tale in Texas? So if visiting those who have already kicked the bucket is on your bucket list, Sisters Grimm Ghost Tour in San Antonio is a lot safer than busting out any Ouija boards.  “I’m very passionate about history, but the ghost stories, just seeing the joy and the entertainment of people’s faces as I share these ghost stories, the fear in their eyes, it’s what brings me a lot of happiness,” said James.