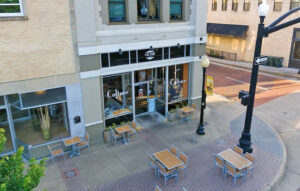 Tyler – Chef Lance McWhorter, owner of Culture ETX, can be a little eccentric from time to time. His far-out food and loud way of life has been sort of a surprise for the town of Tyler. “We haven’t had a chef like Lance in town before,” said customer Jordan Sword. “Lance is the best thing that ever happened to us,” said another customer, Tiffany Gilliam.

Is he straight forward? Yes. “Been waiting for you guys to call for a while,” joked owner Lance.  Does he like his music a little too loud? Of course, he used to be in a band!. “There’s people that don’t dig my style, or don’t dig me, or don’t dig my music, or whatever, and that’s totally fine,” said Lance.

Being a rock star might be the most boring thing Lance ever did. “I’ve been a soldier, a sailor, firefighter, and a medic, a guitar player in a rock band. Now I’m a chef and I own a restaurant,” said Lance. “At first I was like, ‘Man, this guy’s totally lying ’and then you just kind of start putting pictures together and pieces of the puzzles together, and it’s like, ‘Man, this guy’s telling the truth, he’s lived all these different lives!’ And then here he is here. So he’s really cool to get to just kind of talk to. You don’t run across guys like Lance that often,” said customer Ryan Sword. 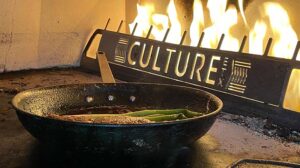 own restaurant, back then Lance didn’t know what to expect from life because he was living day to day. “Definitely not the best kid, definitely not the worst kid, but just things didn’t work out at home so I wound up kind of house hopping and staying with this friend, staying with that friend, living on the streets. I remember I lived in a deer blind in Carrollton while I was working at a Little Caesar’s Pizza,” explained Lance.

That’s when Lance decided to join the Army and that was only his first branch of service. “I was in the army. I was in the Navy. I was a high threat security contractor for the state department. Basically, the Benghazi guys, I did exactly what they did during that time, except I was in Baghdad. And I was actually on my way back to Baghdad, I was on a plane when that whole Benghazi thing happened. And then the next year I said, I’m going to be a chef. Let’s do something really crazy for a living.” said Lance. “I came home, got a job at a restaurant, took a $185,000 a year pay cut, which was absolutely asinine. But it was chasing a passion. It was doing something that I really wanted to do that I really thought that I needed to be doing,” expressed Lance.

Lance worked in fine restaurants all over Big D, learning everything he could. “That was kind of my whole deal so I just needed to get out and just be a sponge and absorb everything that I could from these people. And then as soon as I did that, I was like, ‘All right, I’m ready.’,” explained Lance. 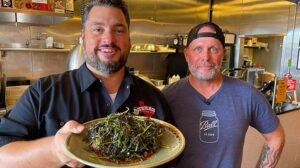 Lance and his wife Bailey settled on taking their talents to Tyler and Lance combined his worldly travels with Texas taste buds. “Being in those really formative years, I was traveling all over the world. I think that’s where I really kind of developed that passion for different flavors and things that weren’t necessarily what my East Texas grandma was cooking at home. It wasn’t rice and beans, gumbo, and chicken fried steak, it was a lot of exotic stuff going on there,” said Lance. “Things from Latin America. A lot of things from Africa, Middle East, of course, far east, there’s a ton of Asian influences in my cooking,” stated Lance.

Well we couldn’t wait to hear what extravagant dish Lance would be dishing out and turns out to be…a pork chop. But this isn’t a boring boar dish, this little piggy has its own story. “The entire pork chop dish is completely composed from something that really happened,” stated Lance.

When this little piggy came from the market, it was raised on an east Texas farm in the forest, where it could roam freely amongst the shaded trees and cover itself in the rich soil. Talk about living high on the hog. “You can see the color on these things, it’s a lot more red than what you’re normally used to seeing in basically grocery store pork,” said Lance as he showed us the slab of pork. 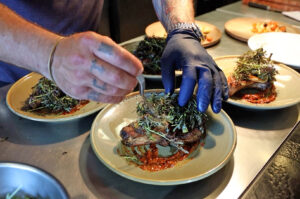 Lance takes the perfect piece of pork and puts it in a hot oil bath, then butter, thyme, garlic and green onions get sauteed with the swine. It’s finished off in the oven and then plated to present the circle of life, back when this fella was living the life in forests of east Texas. Lance lays down a layer of harissa to represent the soil, he then puts the pig in the mud and covers it with the lush landscape represented by green onions, zest of lemon, and Baby Red Frills Mustard Greens. “They’re super expensive, but they’re super worth it. Like we were saying, get the best ingredients you can afford,” said Lance.

And finally, there’s Fennel pollen to make you feel you are in the middle of a flowery foliage. “The flowers in the air, you’ll be able to smell this as it falls,” said Lance. 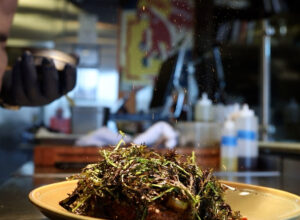 Well, the flavor of the pork chop is fantastic. The harissa has an underlying tone, but then it also does hit you with a big bam. And then that lemon zest on top of those mustard greens mixing in with the sauce below that pork, little crispy green onion on top of that, fantastic. We have been all over Texas trying unique flavors and this one, it ranks right up there. “Every single bite is the same, everybody’s composed. It’s just one of those really… It’s just decadent, it’s really good,” said Lance.

“He gets it all the time. My husband loves it. And so that means I get a little bit of it every time, which is great,” joked Tiffany.

“It’s crispy, and it’s tasty, and it’s flavors you would not normally put together that work so well together, and it’s great,” stated Jordan.

If you’re looking for a little culture in your cuisine, come into Culture ETX. It should be on your bucket list because it’s well worth the stop! “You’ll always find something that you love, you’ll always try something new, and you’ll always be surrounded by some of the best people that you’ll ever meet in your life,” expressed Lance.