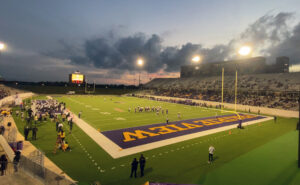 Prairie View – During the fall semester at Prairie View A&M University, the band has a big task on its hands every weekend. Preparing for the next opponent. Known as the Marching Storm, this group of students is carrying on a Texas tradition that goes way back in time. “Historically, Prairie View had a band that goes all the way back to the late 1890s,” stated band director Dr. Timmey Zachery.

Dr. Zachery has been the Director of the Band since 2012. “I had no idea what I was inheriting. I knew after doing my research, that the institution was already famous. The Rose Bowl Parade, they had done the governor’s inauguration, the presidential inauguration, the Super Bowl, commercials. So this band was big time.” explained Dr. Zachery. “The late professor, George Edwards, who is the patriarch of the Marching Storm. It was his baby. He raised it and turned it into this mature band that it became, and this famous band that it became. That was a little frightening at the time coming into that situation. But I think we handled it like a champ and we’ve taken it to the next step and the next evolution of the band.” 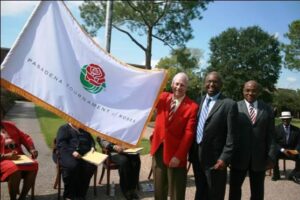 Dr. Zach, as he’s known to students, has since taken the band on to the Macy’s Thanksgiving Day Parade but their bread and butter is being there on gameday. Because halftime is where the Prairie View A&M University Marching Storm comes in at about a category 5. “That nine-minute show is kind of like watching a 40 minute boxing match. These boxers train for hours to do what they do. And these bands men, we are athletes in the truest form in the truest sense that we are here all day, every day, doing what we do in order to make sure that people enjoy what we do,” said Dr. Zach.

As the students prepare for gameday, it’s amazing to watch what a well-oiled machine this program is. Everybody knows where to be and when. This stems from Dr. Zachery’s leadership in turning these college kids into leaders of tomorrow. “Respect what you do. Don’t come in here halfway because I tell them that I’m really good on either end. If you’re all out of it, I’m cool with you. It’s great. You don’t want to do it if you’re all in, I’m cool with you. But if you’re in the middle, we have the worst problems, because you can’t commit,” stated Dr. Zach. 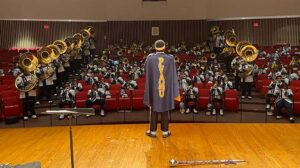 But these students are very committed. “Working with Dr. Zach, it’s a learning experience, you learn a lot, a lot of different things,” said drum major Erinn Burt. Burt helps with getting the band ready for their big performance on gameday. “ You really you can’t let the pressure get to you because you’re here for you know one goal fight to move the band forward,” stated Erinn.

“It’s another family. In the sense,” said tuba player JB Cameau. Cameau also knows the importance of the band. “It provides another aspect of the football game. Not only do you have a game, but you have your entertainment as well. And with all the drills that we do, it really catches your attention,” said JB. “They do this with a badge of honor and pride. The band means that much to them to give up certain things that most people define their college careers with. So that’s really inspiring to me,” expressed Dr. Zach.

In the hours leading up to kickoff, the band comes together and warms up for their performance.  The preparation itself is compelling to watch. “That is what we’ve been striving for, for these 10 years. For them to take ownership, and not have to push them, but for them now to get out and do it themselves. And that’s as any band director, that’s when you know, you’ve reached that level of success. That’s the success that we’ve been waiting for, not to have to drive them, but to let them drive,” explained Dr. Zach. 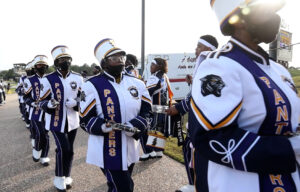 The band members at Prairie View aren’t just getting a lesson in liability. They’re also learning about life and how to articulate their thoughts in real world situations. “Being responsible to other people. And that’s a difficult thing to do with this generation. This generation is, is disjointed, is disconnected. They are text babies. The biggest fear that my students have is talking to me. If you come to me, you gotta come correct. So that when you go wherever you’re going, and you have your first job interview, you’re going to remember what it felt like to come in my office and say, whatever it was that you were asking for, that you had to ask for it the right way. And they’re not accustomed to that challenge,” explained Dr. Zach. “There’s no harm behind what I’m saying. I’m just trying to correct what you do before you leave here. And you go and sit in front of someone else and make the same mistakes that we could have corrected while you were here. If you can’t do the things that they’re your employer or the person that you’re working with is asking you for, you will no longer have a job. And they need to get used to that right here, right now, in order to be the best persons that they can be in whatever career that they choose,” said Dr. Zach. 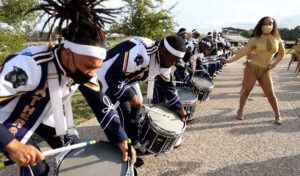 Dr. Zachery passionately preaches these things every day. Then he makes sure his percussion section is ready to put on a show. The rolling thunder that is the marching storm draws a crowd while making their way to the stadium. With eager onlookers excited about the amazing display they’re about to see. “The energy is always put into the enthusiasm of the students. If they can give the audience that enthusiasm, they could be playing Mary Had a Little Lamb, and it’d be the greatest version ever,” joked Dr. Zach. “We’re here to put on the show, handle my business,” stated Erinn.

As soon as the band makes it to the stadium, it’s time to put their game faces on. While the team exerts all sorts of energy out on the field, the Marching Storm does the same in the stands. And finally, halftime arrives and not a single patron leaves their seat. “People want to stay and watch the show. That’s what they’re here for,” said Erinn. 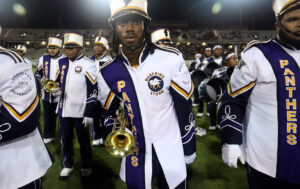 These nine minutes won’t define these student’s lives but it sure does build up their charisma and character so that wherever life does lead, they’ll be ready to march in and take it. “To bring in these kids who are hard luck kids and give them the opportunity to become engineers, to become nurses, to become doctors, to become lawyers. And I’ve seen everything that I just mentioned. We have, it represents a representative of those particular professions in just the last nine years that I’ve been here,” said Dr. Zach. “They have the one misconception like, ‘Oh, I’m in college. And I got out of his, out of high school. I can party.’ But the band says, ‘No, you still got work to do.’ And it just forces your work ethic,” explained JB. “We are perfectionists. That’s the one thing about us. Yes, sir,” said Erinn. “We’ve all seen bands, but what the marching storm brings to life is a story. And it’s an age- old story. It’s a story rooted in the history of the institution and the people. And until you’ve seen it, nobody can explain it to you,” expressed Dr. Zach.