Conroe – Montgomery County is rich with Texas history. The Texas flag was created here, Texians from here fought at the Alamo, and honoring that love for the Lone Star State is commonplace here. But so is their respect and admiration for those that served our country, that’s why you’ll find The Montgomery County Veterans Memorial Park here.

“Growing up in Montgomery County is great. It was great then and it’s great now,” said Jimmie Edwards. Edwards grew up in Conroe, he served as a state representative from here and he was a county judge. But first and foremost, he is a Marine. “There’s no such thing as an ex-Marine, just a former Marine. A former active-duty Marine. Yeah. Oorah,” said Jimmie. 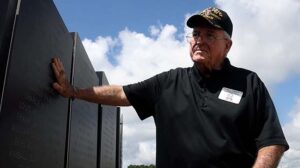 His passion for veterans is extremely evident and that’s why he led the charge when it came to creating a new park dedicated to those who served. “We always hear that it was the Greatest Generation during World War II, the Great Generation. We believe that there is another great generation ahead of us if they are educated and know about the past, that’s what this park is about. Historical context and the sacrifice,” explained Jimmie.

Before Jimmie went into the Marine’s, he actually spent time on Capitol Hill. “As a Congressional Page, I worked in the House, US House, US Senate. I worked as a Supreme Court page and then I worked as a page under Lyndon Johnson,” said Jimmie. “It was great. It was just quite a fantastic experience. I went to Congressional Page school. I was on the floor of the House of Representatives in 1964, when the Civil Rights Act was passed, and so I saw a lot of historical legislation passed,” stated Jimmie. 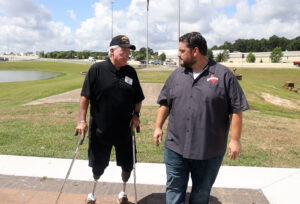 In 1968, riots in Washington D.C. left him wondering what more he could do for his country. “I along with several other of our buddies, we decided that we’d stop talking about it and go do something at least find out what was going on. So I joined the United States Marine Corps,” expressed Jimmie.

In a few short months, he found himself in the middle of Vietnam. “We didn’t discuss the political ramifications or the merits or demerits of the Vietnam War. We just figured out what we’re going to eat next. Were we going to have something to drink and how are we going to stay alive,” explained Jimmie.

A year later, his life changed forever. “I was wounded on August the 19th, 1969. Lost both legs to a 122-millimeter rocket,” stated Jimmie.

Jimmy was medevacked and refused to return home in a wheelchair. “There were two things I was going to do. One was to walk home and two I was going to wear my dress blues home,” expressed Jimmie.

In December of that year, he returned to Texas. “At that time in ’69, there was such a backlash against the soldiers. The soldier himself. Not the policymakers that described our policies in Vietnam, but us. And so a lot of men were coming home without all their uniforms, ditching their uniforms, not wearing their uniforms. There were a lot of threats against us. So I said, I was going to wear mine home. I didn’t care what they said,” said Jimmie. “I stepped off the airplane to 250 people from Montgomery County in Conroe to welcome me home. That’s when I made my decision that one day, I would pay that back and that’s what this park’s about,” said Jimmie. 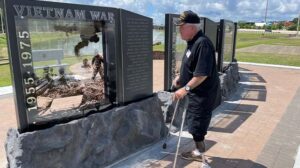 But it’s not just those who fell that are honored, everyone who served has a spot at this massive memorial. “There are 580 names that have been gathered here of men and women that had served in the United States military services. This line will continue on each year we dedicate the new names. Memorial Day, Veterans Day. This Memorial never stops. Anyone who served in the United States armed forces from 1776 till now is eligible to be on here. They come from all over the country and all to say we have names here that people don’t even know where Montgomery County is,” explained Jimmie. 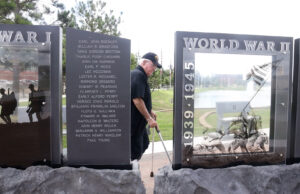 A lot of times with memorials like this, you see those who paid the ultimate price, why include everyone? “Because they were willing to take the oath. They could have paid the ultimate price. We need to recognize all those that serve and that’s what we’re doing here, and also those that fell. That was a lot of the issue and problem. Some people said, my name doesn’t deserve to be on something. I said, ‘Yes, it does. You didn’t know where you’re headed, or what you were going to do, and what your MOS was going to be.’,” explained Jimmie. “There’s something very important you must understand about the line, there is no rank. It is your name and your branch of service. There are three-star generals on that line, and there are privates on that line, but they all served and willing to serve equally and that’s what the line is all about,” said Jimmie.

Walking around the Montgomery County Veterans Memorial Park is a memorable and moving experience. It’s a chance to thank everyone who’s ever served for their service and to reflect and respect those who made it home and remember those who didn’t. “If you want to come see something, like how we believe in our country, how we support our veterans, how we support our first responders, how this county does it, and how we feel it? Come to Montgomery County, come to Conroe, and you can see it,” stated Jimmie.