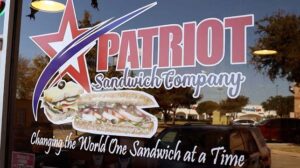 Denton – Hidden in a huge shopping center in southeast Denton, you’ll find a particular place for sandwiches dedicated to the people that have served our country.  It’s called the Patriot Sandwich Company and it’s owned by army veteran David Jordan. “Who doesn’t love a good sandwich,” stated Jordan.

His sandwich shop brings in the same sort of salt of the earth people. “The first week they opened, it was the first time I’d been here and I’ve been coming in at least three times a month since,” said Timothy Rush who also happens to be an Army Veteran. 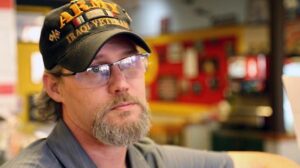 “I usually try to sit in the Marines. I’m just a little bit partial. My son’s a Marine. I’ve adopted several kids, not legally, but in my heart, but they’re my boys too. So I just love the Marines,” said customer Linda Davis.

“I’ve actually had two World War II veterans come in here. And they teared up when they saw my shop. That is the greatest feeling in the world, having them appreciate what I’ve managed to put together here,” explained David.

But David’s sandwich shop isn’t just a business, it’s a way to fund a charity he created called “We Got You Six”, an organization that helps homeless veterans get back on their feet. “We’ve managed to help 40 families in the last six years, just by connecting them to resources. And I’ve been building my resources up so that when I build my facility, I’ve got the resources I need to be able to bring in to help people out,” explained David.

“I love seeing veterans get to open up their own businesses, especially one that helps support We Got Your Six. They’re backing another one. I don’t want to see any veterans out homeless,” expressed Linda. 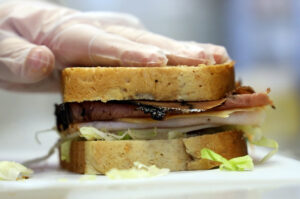 The reason David is so devoted to this cause, he knows exactly what those veterans are going through. “Six years ago, I was a homeless veteran living on the streets of Kentucky. And my cousin knew I needed help and brought me out here to Texas to help me get back on my feet,” explained David. “That’s one of the reasons I’ve dedicated my life to homeless veterans and trying to help them and inspire them to not make that permanent decision for what could be a temporary problem,” said David.

When it came to changing his circumstances, David had just the right resources to help him do so.“Honestly, just having the right resources made it very easy. And that’s the problem with a lot of these guys, they don’t have those resources or there’s more people out there that need the resources than what they are capable of,” explained David.

While that pandemic and put a damper on business, David’s determination in helping the homeless won’t allow him to go AWOL. Those days when David was homeless drive him to succeed and to help other veterans. “You know, when I’ve got the days that I struggle here and I wonder if we’re going to go, if we’re going to be able to make it, I think of where I was six years ago and what I went through on the streets and I’m like, ‘You know what? I do not want to go back there.’,” said David.

“I think it’s awesome. I mean, I’ll support any veteran organization and David goes above and beyond,” said Linda.

Well I’m ready to show my support by selecting a sandwich with a silly name, “The Better Than An MRE.” “Of course anybody who’s been in the military knows that anything’s better than an MRE,” joked David.

David gets started with prepping our delicious sandwich along with some military jokes! “The way we have our sandwiches setup is we have two different sizes. You have your Officer, which is only six ounces of meat and cheese because officers don’t do anything but sit it on their butts all day. And you have the enlisted, which is eight ounces of meat and cheese because well, the enlisted do all the work,” joked David. 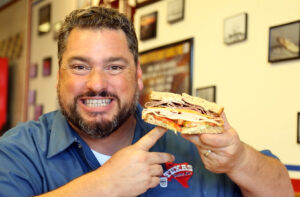 David whips us up the delicious looking sandwich, which is a meat and cheese sandwich with my  choice of vegetables because these sandwiches are made however you’d like them! After adding lettuce and tomatoes, the Better Than An MRE built by David looked marvelous. Next up in the sauce and this is something David takes as seriously as his sandwich combinations. “I’ve got nine custom sauces. All the sauces are homemade. They’re all original recipes. So you’re not going to find them anywhere else. Yeah. They’re all named after missiles and bombs,” said David.

So I bust out this behemoth of a sandwich to see if it really is better than an MRE and it was.  Obviously. It reminded me of the kind of sandwiches I used to make in college. It’s filled with meat and great! “Actually, I tell them don’t put so much on there because I can’t eat it all,” joked Linda.

That Stinger sauce provides just a nice little sweetness of the honey mustard and a little bit of kick from the horseradish. It’s not too bad, but an excellent combination for the Better Than an MRE. “The sauces are the best. That makes the difference,” stated Timothy.

Well, whether you’re a sailor, airman or soldier, getting a sandwich at the Patriot Company is something you can salute! “It’s so much like a museum here. You got nice art to look at, the memorabilia, and the food is delicious,” stated Timothy.

There is no doubt that David is proud of his accomplishments and he wears it on his sleeve. “Giving back to my community, honoring my veterans, giving the veterans a place where they can come and feel nostalgic and comfortable and feel appreciated,” expressed David.