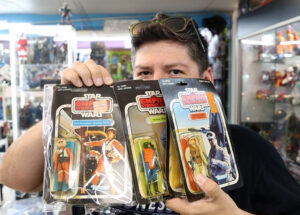 Houston – Growing up is hard to do.  The days of not having a worry in the world and an abundance of time to play with your toys is a period in life you never realize will be over too soon.  Fortunately for folks looking to rediscover those distant memories, there’s a toy shop in Houston that has got you covered. Misfit Toys. “Eighties toys, that’s my jam,” stated owner Daniel Rivera.

From He-Man to some classic horror flick figures, Daniel has a daunting collection. “In this store, there’s about 12,000 toys. Yeah. In the other store, there’s probably 10,000,” stated Daniel.

You see there was only a short time in his life that Daniel didn’t collect these connections to his past. “From age 12 to 14 are the only years I never collected toys and that was it. My room, wherever I moved, always looked like this. I always had toys on the wall. I was a huge collector, even as a kid. I wouldn’t open toys. I would just collect and collect. Then one day, I was probably, yeah, I was probably 14, I discovered garage sales. Oh, forget about it,” explained Daniel. 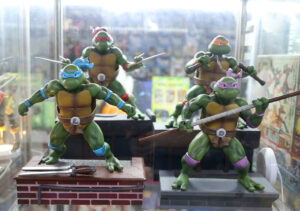 Having to get around to garage sales wasn’t his choice but when he discovered a treasure trove of toys from time to time, Daniel started wheeling and dealing. “This lady had like a hundred Transformers all complete. I asked her. I was like, ‘Well, how much are you selling these for?’ She’s like, ‘Well, the little ones are like 50 cents.’ I’m like, ‘Oh, my god.’ ‘The big ones?’ ‘Those would be a dollar.” I knew right then and there that road to perdition was about to begin. I told my mom. I was like, ‘Look, y’all dragged me down here. I need like 30 bucks.’” explained Daniel.

His collection grew but so did Daniel and first he found a career in oil and gas. But dealing with that everyday wasn’t what he wanted to do with his life so that’s when he started Misfit Toys.  Now his collection is constantly for sale and keeping up with inventory can be a bit a little scary. “Whatever it takes, man, we got to buy them. Somebody is dying to have some Polly Pockets, so we get them. Somebody’s looking for Barbies from the ’80s. We get them. There’s enough clientele for every toy line that we usually don’t turn too many people away. These toys are just getting older and they’re getting rarer to find and harder to find and more expensive, but people don’t care,” said Daniel. 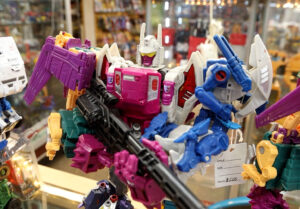 If you want to see the good stuff, you’ll have to ask.  All the original Star Wars toys are in the back.  “There’s a bunch of original, 1978 to ’83 carded Star Wars figures, but we don’t keep them out here. We keep them in the back for the heavy hitters. If they ask, we take them to the back. We put on gloves and all that. They can touch them. We don’t want the oil from your fingers getting on them. We just sold an original mint, mint condition un-punched, meaning they never hung it on a hook, Darth Vader the other day for 850 bucks. That was a very low price,” said Daniel. “Those are an investment. They just keep going up, up, up. They never go down, not one dollar. They just up, up, up, up, up, up, up,” said Daniel.

With Thundercats, Ghostbusters, and He-Man being my go to cartoons from childhood, the flood of memories come rolling in. “Everybody likes the old stuff the best. I mean, there’s just something about that He-Man with the swivel action,” joked Daniel. “It comes back so fast. You love it and it’s never ending,” he said.

Daniels favorite pastime toy, the Transformers. “When it comes to Transformers, man, there is, literally, an endless amount of product for this toy line. I even have people that I hire that are just Transformer experts,” Daniel said. 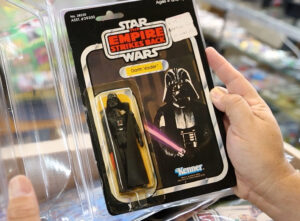 With over 3000 on hand, I was able to find the few I had as a kid and you’d be amazed how many guys my age regift themselves later in life. “You should see this place in January. Forty to 50% of the inventory will be gone,” said Daniel.

So if you grew up during the 70s, 80s, or 90s and you need a fix of when you we’re young, Misfit Toys checks the box on The Texas Bucket List. I love coming here and if I wasn’t the owner, I would shop here all the time, even if my wife told me not to! I absolutely love what I’m doing. I get to play with toys all day, hang out with my friends, and make a ton of money,” said Daniel.