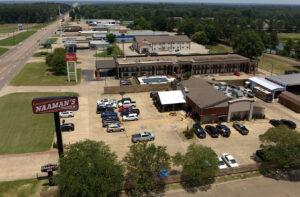 Texarkana – When traveling around Texarkana, sometimes it’s hard to know where Texas ends and Arkansas begins. But when you smell the sweet smoke of BBQ through the air coming across the state line, you grin and bear it while sneaking across the street into the Bear State to try Naaman’s BBQ.

Darby Neaves is the owner of Naaman’s and there’s no question where his allegiance stands. “Well, I was born in Texarkana, Texas but I grew up in Ogden, Arkansas. Now, if all hell breaks loose, I will be in Texas,” joked Darby Neaves. And his BBQ? “Yeah, absolutely it’s Texas style,” stated Darby.

Now this all started when Darby went to his first BBQ cookoff. “Me and my pastor went to Arkadelphia to a barbecue cook-off just to see what it was like, and they let us be judges that day. I had some of the best barbecue I’d ever had in my life and then I had some nasty stuff, and we swear to you, you couldn’t swallow, you had to spit it out,” said Darby. 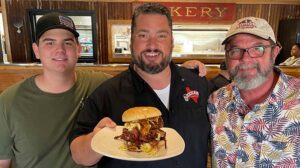 After chewing on it for a while, Darby decided to start a team. “I got obsessed with it. We just went all in,” stated Darby.

Darby’s team went on to win several cookoffs. “Had a lot of people, a lot of good cooks, take the time and show me a lot. Some of them will tell me almost the truth and I’d have to figure the rest of it out. But that’s competition, isn’t it,” said Darby. 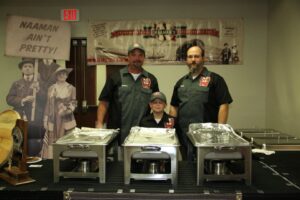 Back then Naaman was just a kid. “I’ve been in this for almost 10 years now,” said Naaman. “I’m very proud. He’s still a kid in so many ways, but at the same time, he’s not,” expressed Darby.

Naaman’s is known for a sizable sandwich that might as well be another one of Darby’s kids, except he calls this one the “Red Headed Stepchild.” Naaman got things started with a buttered bun that gets topped with torn up brisket. “Yeah, you just rip it apart so it’s easier to chew because burnt ends are kind of tough,” explained Naaman. “In Texas most of you don’t have chopped anything. I used to have a saying, ‘Chops are for people who don’t know how to cook’,” joked Darby. 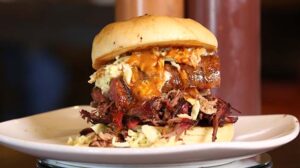 Then comes the pulled pork. House made sausage is stacked on top of that, then comes the coleslaw, and two kinds of bbq sauce. It is a beautiful, big, old sandwich. All sorts of meat, coleslaw, sauces.  Such an incredible assortment of flavors. Much like the Ark-La-Tex, you got three different things coming together to make one incredible dish. “It’s my top five,” said customer Chuck Holle.

It’s kind of like when you finish your three-meat plate and you got a little bit of coleslaw left, and all those meats, you just have to scoop them together and put them in a slice of bread, and it’s amazing. “Good sandwich. It was a mixture of everything that’s on the menu, just about,” said customer Brian Talley.

Well, if the Red Headed Stepchild was in my family, this would be the favorite. “I’ve eaten a lot of barbecue, and this is the best barbecue I’ve ever eaten,” said Irene.

“The brand of names, the brand means more to me than money. It’s my son’s name. He was three when I started competitions. I had no idea that it would ever turn into something like this. That’s not my name to ruin. I want that name to mean something. Quality,” explained Darbey.