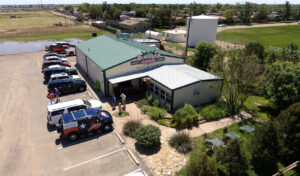 Amarillo – Over the years in the Panhandle we’ve met all sorts of colorful characters like Bob Lile at the Lile Art Gallery, Angela Corpening at the Golden Light, or the Oliver family at the Oliver Saddle Shop. Well now you can add Margaret Glasscock, owner of Green Chile Willy’s to that list. “You get over 70 and you go to thinking, ‘God I’m falling apart.’,” joked Margaret.

Margaret has lived in Amarillo for over 50 years and back in 2007, she opened Green Chile Willy’s with William Douglass and Scooter Jeffers. “Every nail in the place we put in here ourselves. Every board, everything in here, we did ourselves,” said Margaret. 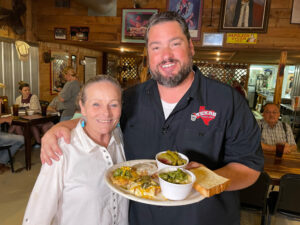 William and Scooter moved on but Margaret has been making sure the Green Chile Willy’s continues to crank out some of the finest chicken fried steaks in the state. “That’s what we’re famous for,” stated Margaret. “This place is the number one place to eat chicken fried steak,” said customer Cody White. “Good home cooking. Good atmosphere, great food,” said customer Jack Lewis.

But it’s not just the chicken fried steaks that have one heck of a reputation, so does Margaret! “When they know I come in the back door, they know it’s heads up time,” said Margaret. “She keeps this place together. She keeps it going,” said customer Brittney Flatt.

Jim Robinson is the GM and Margaret’s son and not always the ultimate bad cop. “I can come in, I can yell, I can put the pressure on and say, look, if you don’t fix this, she’s going to show up. So it helps a lot,” said Jim.

“My kids all maintain my business. So if they don’t do something right, they’re your kids. You can pop them upside the head,” joked Margaret. “She is one tough, tough lady. Tough lady,” joked Cody. 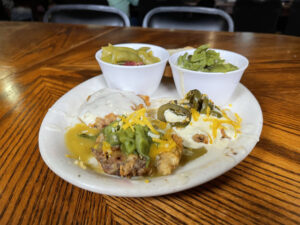 “When she started building this place, I thought she was crazy. I told her that. I said, there’s nothing out here. Why would you want to build a restaurant in the middle of nowhere? I ate my words,” joked Jim.

Speaking of eating, I was extremely excited to try a chicken fried steak, because green chile is what they’re known for. “Our green chili chicken fry is one of our main deals. Everybody loves it. It’s why they come here,” stated Jim.  “Everybody’s partial to the green chili because that’s our name. Everybody wants to try the green chili,” said Margaret.

Turns out they also have a jalapeno gravy that’s also extremely popular. “Puts that warmth in your belly and gets you going,” said Jack.

My only problem, how do I pick? “We have what you call a sampler plate… You can just pick and choose which one you like the best,” said Margaret.

Jim got started on the sampler by throwing three small freshly breaded inside round steaks in the fryer. “We probably sell, like I said, two to 300 chicken fries a day,” stated Jim. That’s a lot of chicken fried steaks! 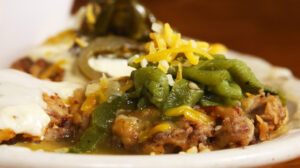 Once they’re fried up to a tender perfection, Jim slabs on three different and distinct gravies. He the tops them with jalapenos and green chili, throws in some green chili mac and cheese and some green beans.  That officially makes my dish the most green I’ve ever seen on a chicken fried steak plate!

For my first bite, I stuck with the traditional gravy and right off the bite I notice that this has got to be one of the meatiest chicken fried steaks I’ve ever had! “Up here is beef country. I mean you can’t beat it,” stated Cody.

Next up, the green chile gravy. The flavor of the green chili gravy is warm and delicious with some incredible spice thanks to those fresh green chilies on there. It definitely kicks things up a notch “The green chili is not as spicy as the jalapeno, but it’s got a little warmth and it’s kind of a different, unique flavor,” said Jack.

And finally, the most popular one, the jalapeno cream gravy. “It’s got all the jalapeno flavor, but we make it with cream cheese so it doesn’t have all the bite and it’s really good,” said Jim. That jalapeno cream gravy is rich and spicy. That is definitely not diet food, but still absolutely delicious! “The flavor of the jalapeno and the tenderness of the chicken fried steak. It melts in your mouth, you just have to use your fork. It just falls apart, it is so good,” said Brittney.

Well, if you’re looking for a chicken fried steak that packs a punch in the panhandle, come into Green Chile Willy’s in Amarillo to sample the sampler.  Its incredible selection of gravies is definitely well worth a stop on The Texas Bucket List!

“It’s a great little place. We stay very busy and I’ve been blessed. That’s all I can say,” expressed Margaret. “Number one in my book, best in Texas,” stated Cody.