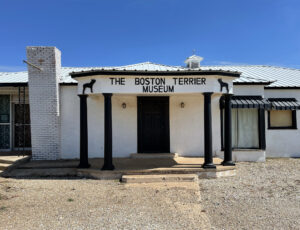 Floydada – Dogs can change a life. Every moment you have with a furry friend leaves an indelible memory.  The laughter and unconditional love a pup can provide proves they really are man’s best friend.

For Bob Hambright from Floydada, it’s Boston Terriers that pull his heartstrings.  “People that have Boston Terriers, that’s the only kind of dog there is,” said Bob.

Bob lives in Floydada and this small Texas town is where he’s been pretty much his whole life. “I never did move away on time. Only time I left here, it was when I was in the army, and I was in ’57 to ’59. I was gone for two years,” explained Bob. In 1968, he married Francis and they spent 44 years together.“She was the highlight of my life, I guess. She was a sweet girl and everybody loved her,” expressed Bob.

The only love that could compare to their dedication to each other was their infatuation with Boston Terriers, so together they created quite the collection. “Well, I had to put that on my wife. She gave me a large sand cast, Boston Terrier on my birthday, in 1991. Then I started to collect,” said Bob. 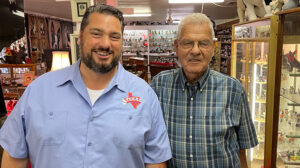 Bob’s collection takes up an entire building and if you gave each one of these dogs a bone, these knick knacks would have way more than they could chew. “It took up about half the building, a little bit more. Then I just started collecting a little bit more. And first thing you know, I filled up the building. Then I don’t have room now for anything. I should have got a bigger building,” joked Bob. 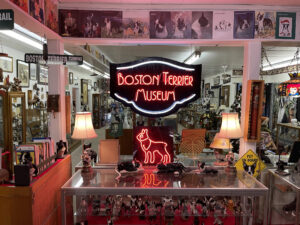 From pipes, plates, to patriotic pups if it has a Boston Terrier on it, Bob’s got it. If we had to put a number on it, well. “Just a few thousand. Rounded, just round it off, just to 2000,” said Bob.

“We’ve been crazy about Boston’s forever. I’ve never not had a Boston in my life,” stated Bob’s daughter, Alissa Carter. Alissa not only supports her father’s passion for pups, she feeds into it. “It kind of became a quest for all of us to find something that he didn’t have. So we kind of fed the frenzy as well. Yeah, we have,” joked Alissa. “When he talks about his dogs, he lights up, and it’s amazing what tales he tells. He’s a pretty quiet man. But when you start talking about Boston’s, he seems to perk up and he can spew a lot of information out to you. So it’s just, it’s been a good passion for him,” explained Alissa.

Any idea how many Boston Terriers Bob has had through the years? “I’ve had five. Yeah. I’ve had five. AJ, Arnold, Harley, Sam, Spike. That’s five I’ve had. Probably the smartest one I had, was Spike, the last one. He was smart. He was smarter than I was, that’s for sure,” said Bob. 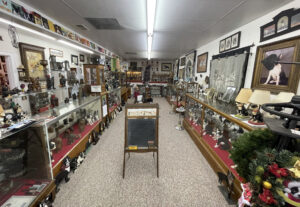 It’s been said that dogs are not our whole life, but they make our lives whole. For Bob that saying has a whole lot of bark.  “I don’t know. They just get next to you, and just fall in love with them. They are just like one of the family. When you lose one, you shed a few tears. I shed a lot of them,” expressed Bob.

So if you’re up for a kookie collection of crazy things dedicated to the Boston Terrier, a trip to the Boston Terrier Museum in Floydada is a great stop, just be sure to bring your dog. “When they come here, they bring their dogs, which I love. Any dog is allowed here,” stated Bob. “If you love a Boston, it’s definitely a bucket list place to come,” said Alissa.