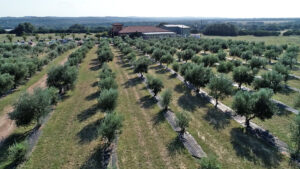 Dripping Springs – When talking about the Texas hill country, you always picture the rolling hills and massive oak trees. But if you head over to the Texas Hill Country Olive Company in Dripping Springs, you’ll feel like you’re in a whole other place.

“Looking back at the building, I can’t help but feel like you’re in Italy. Especially with those hills back there and everything,” said John Gambini, owner of the Texas Hill Country Olive Company. John is a third generation of Italian and his family came to Texas through Beaumont, he was raised in Huntsville.  Being bred in that bada bing bada boom sort of lifestyle, he is always lingering to do something that resonates with his roots. “You know, we’re really proud of our heritage and that’s really what had been calling me most of my life to do this,” expressed John. 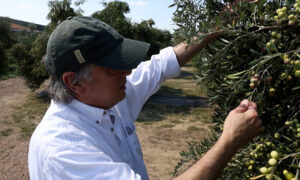 For 47 years John was a builder but now he’s known for all together something else, olive oil. “I tell people I’m an oil man, yes. When they asked me if I’m in the oil business,” joked John.

John and his daughter Cara work side by side at the Texas Hill Country Olive Company always pressing one another to do their best.  “It’s trying at times, because we both have different opinions about things. I’m trying to bring in the new and he’s trying to bring- keep the old, but I think we balance each other out quite a bit,” said Cara. “She’s grown and it’s been amazing for me to watch her grow as a businesswoman,” expressed John. 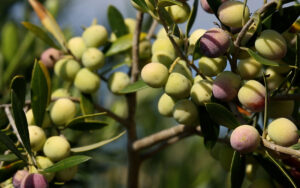 While these two didn’t have a background in agriculture, they’ve gotten a crash course in it and have been burning the midnight oil since John bought 16 acres in the hill country back in the 2000’s and started planting trees in 2009.  “Our idea was we could, the family could make a living off of this farm, this orchard, for generation after generation, forever, really, so long as we take care of it,” explained John.

With several types of olive trees on the grounds, none of them make table olives, only olive oil. “We’ve got seven extra-virgin olive oils, we’ve got like eight infused olive oils, and 18 different balsamics. So there’s a lot of different ways that you can blend and mix those things and take stuff from the garden and play with that and make it just into something that’s really delicious and wonderful,” explained Cara.

“We’re very passionate about educating people about what extra virgin olive oil really is because there has been a lot of mystery surrounding,” stated Cara. 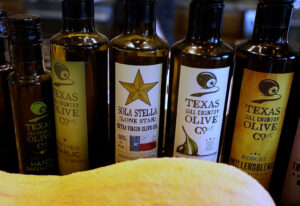 What exactly does extra virgin olive oil mean? “Extra virgin olive oil simply means an olive oil with no defects. A defect would be a bad smell or taste. It has to be really good. It has to taste fabulous. Everything has to be right from the tree, to the milling, to the temperature that they’re stored at, to the temperature that they’re milled at. And if you do all the things right, and all the stars align, then you have a defect-free olive oil,” explained Cara.

Cara busted out their top three olive oils that range from delicate, medium, to robust.  We started with the delicate. “A lot of people really love it because it’s quite buttery. And I like to call it an everyday oil. We’re not dipping this in bread. This is a challenge. It’s a challenge for those who haven’t tasted olive oil by itself,” said Cara. “I like to cover it with my hand, which is going to keep the aromatics in. And we’re just going to swirl it around a little bit, which is going to help to release the aromatics. Okay. Now we just open it up,” explained Cara 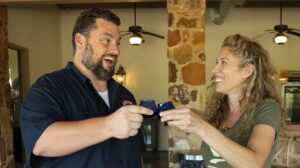 I had no idea how crazy things were about to get. “Okay. Now we sip. Just a little bit and then we’re going to slurp it. And you might want to let me do it first and then you can follow my lead. You got it. So now you’re going to start feeling it. Get a little peppery hint in the back of your throat,” explained Cara.

Turns out olive oil isn’t just good on their amazing selection of sandwiches and salads, it’s actually quite interesting all on its own. “This is the medium. And for our Terra Verde, this is actually my favorite. I like it because it has some grassy notes to it and it makes a really excellent finishing oil,” said Cara.

And finally, the robust, and it was flavorful and delicious! “I personally like it. It’s good for your health,” stated Cara.