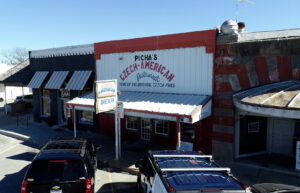 West – Whenever we stop in West, Slovacek’s is where we gas up and get our favorite kolaches. Now the BBQ is divine at Slovacek’s but if you’re looking for something a bit different in this town known for its Czech heritage, then the Czech-American Restaurant is the check mark you seek.

“I love to make people happy when it comes to food,” said owner Janene Gueringer.  The Czech-American is a laid back eatery that’s been in Janene’s family since 1980. “This has been my only job. I’ve been here forever,” said Janene.

So has some of the help! Her friend Malorie has been with her for over 20 years, Marcy the cook has spent 25 years here, so Janene definitely has a camaraderie of people who are proud to work alongside her! “It’s an amazing feeling, because I think they kind of like me. I’m a great boss,” joked Janene. 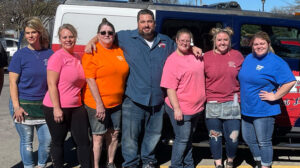 That’s because Janene has done it all! For as long as she can remember, she has been washing dishes, busing tables, and putting pivo in pints. “Oh, I could barely see over the bar, like reach the bar. Yep, my dad and all his buddies would be sitting at the bar drinking, having a good time and dad would holler at me, ‘Janine, go grab us a beer.’ So I ran back there. Barely set it on the bar, but…And then I would go run back around the bar and stick my hand out and they’d all give me quarters to go play the video games in the back,” said Janene.

Her mother Patsy was the patriarch of this place and was well known for her perfect pies. Thank God for her, because she has taught me everything I know. So it’s all up here,” said Janene while pointing to her head.

When Patsy passed away in 2015, Janene was adamant about keeping that tradition alive. “It hurt my feelings to make my first pie. It was kind of tough. She took such pride in making them pies and meringues that tall and everybody’s like, ‘Well I don’t like all that meringue.’ Sorry, that’s the way I was taught, and I’ll never change that recipe. I’ll always be a mile high meringue,” explained Janene. 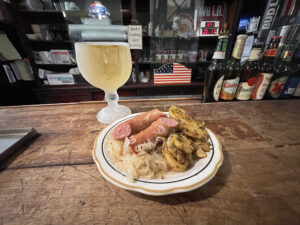 The other popular dishes here consist of anything Czech. Seriously anything. “A lot of Czechs still live here. You have all your Czech last names, and have to feed people what they’re used to,” said customer Eric Kostecka.

“Just the way that it’s made, it’s not the same everywhere and I think that the way they make it is from their family tradition, a good Czech recipe and you can’t beat those kinds of foods,” said customer Stephen Nesrsta.

Well when it comes to Czech food, you know sausage and sauerkraut are going to be involved. “I do like the sausage and kraut sandwich,” stated Eric. 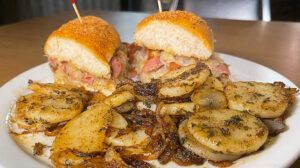 I’m getting it sandwich style with something called the Bohemian. Marcy gets my sandwich started by buttering the bun. While the bread grills up, Marcy throws on some pepper jack cheese and then goes for the pot of gold, a big boiling vat of sausage on the cooker. Once Marcy slices the sausage and slides it onto the sandwich, the sauerkraut comes into the equation and mustard is added as well.

Once the sandwich is ready, Marcy whips up some Czech fries which start with sliced potatoes, and are topped with special Czech fry seasoning. “Cannot tell you what’s in it. That’s my secret,” said Marcy. And now my meal is complete.

As I sat down with this behemoth Bohemian sandwich, it was steaming fresh off the grill from Marcy. The smell coming off those potatoes and that seasoning is sensational and I couldn’t really smell a difference in the kraut, but we hear you can taste a difference.

After one bite, it is absolutely amazing. The kraut definitely has a little sweeter tinge, but it’s not overpowering. It actually compliments everything very well. 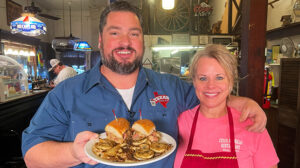 “We never leave here with anything left on the plate,” stated Doug.

“It’s different than my grandmother’s, but yet it’s their own flavor and every now and then I like the taste of it,” explained Eric.

And of course you have to finish things off with a little bit of pie which is of course homemade and fantastic.

Well, if you’re looking for the perfect check mark, coming to the Czech-American Restaurant in West is well worth a stop. Thanks to the Bohemian sandwich, those Czech fries and that incredible coconut cream pie, definitely a filling and fulfilling stop on The Texas Bucket List.

“Knowing they’re going to get something good to eat, makes me happy,” expressed Janene.