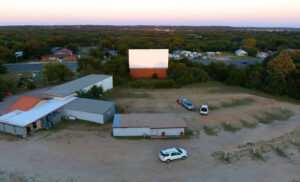 Gatesville – Back in the late 50’s, Texas was home to nearly 400 drive-in theaters. Today there’s only a handful that remain. One of the oldest is in Gatesville and it’s called the Last Drive-In Picture Show.

“I’ve had so many memories here, it pretty much is my second home,” said theater manager Dana Palmer.

Dana is a one man show. Throughout the year, he’s in charge of pretty much every task at The Last Drive-In Picture Show in Gatesville. From the drive-in, the indoor theater, the concessions stand, to the mini-golf course, there’s always something to work on at his family’s business. “I started doing the marquee when I was probably 12 or 13 years old. My dad would say, ‘I don’t want to do the marquee. Will you go do the marquee? I’ll give you $10.’ So I started doing that and I’d start cleaning during the movie, then I started doing projector work and just kind of escalated from there. And I just stayed. I never knew any other job,” explained Dana. 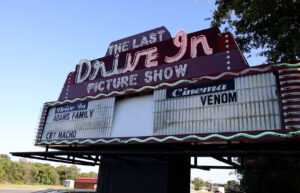 While the indoor theater is fairly new here, being built in 1972, the main attraction has been a part of Gatesville since 1950 and it’s one of the oldest, if not the oldest, drive-in in Texas. “It’s a pretty good while for something to stay afloat,” stated Dana.

Originally known as the Circle S Drive-In, Dana’s grandfather Gene Palmer knew the place very well. As a teenager, Gene took a job at theater and stuck with it. “He just wanted a job real bad. I guess he liked the movies real good. And he said, ‘I’ll do anything, just put me to work.’ And so they had him doing the parking lot and making sure that everybody was where they needed to be, lights off, all that. He just stuck with it until he bought it, I thought that was pretty cool. That’s passion,” said Dana. 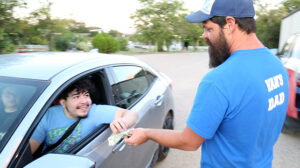 Since 1965, it’s been a part of Palmer’s family and that’s not changing anytime soon. “This is all he did. He loves this place. I mean, he could never sell this place. It would kill him I think. This place is his baby. And just kind of being around that I feel like I really should hang on to it. And I do feel like that. I really like the place, it’s pretty good,” said Dana. 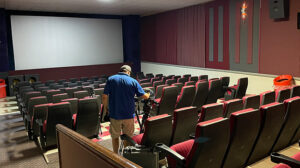 Closed only on Christmas Eve, you’ll see the luminous light from the projector radiate south of town 364 nights a year. “I mean, I like doing it. People come up, they’re usually here to have a real good time and it’s always just nice, offering that kind of entertainment, enjoyment for families. And I think I got that watching my grandpa doing it. He enjoyed it. I enjoy it too,” explained Dana.

While the state-of-the-art projector now showcases the latest Hollywood hit, remnants of the old times are still around.  It’s a cross between the new age of cinema and the classic feeling that drive-ins often have. “We keep the nostalgic prices, almost,” joked Dana.

While weekends are busy, the theater just kind of gets by on most nights but it’s still something to do around Gatesville. Kind of a one stop, all entertainment complex for Gatesville. “Well, I wish we would be more, but yeah. It’s either this or Walmart. Go hang out,” joked Dana. 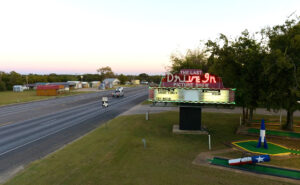 But there is one memory that Dana does fondly remember. “I sat down, actually right about there with my woman I have now. And watched our first movie together. It was, Sweet Home Alabama,” said Dana.

For Dana, this is all about keeping the business alive and well for Grandpa Gene because he never wants to see the Last Picture Show Drive In, ever have it’s last picture show. So he is following in his Grandpa Gene’s footsteps and running the show. “That is hard. That dude, he’s got some big shoes to fill and now I don’t even know if I could even be close. But, it keeps me trying,” expressed Dana.