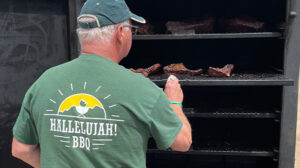 El Paso – Blake Barrow is a man with a passion.  A passion for cooking on a pit. “Obviously, I love the barbecue. I have been a student of central Texas barbecue for at least 45 years,” said Blake.

Most days, you’ll find Blake tending his pits in a downtown El Paso parking lot, preparing part of the meal at this heavenly hot spot called Hallelujah BBQ.  But this isn’t Blake’s full-time job, this is sort of a side hustle to his head duties as the CEO of the Rescue Mission of El Paso.

“The barbecue is simply a means to an end. And the end is restoring people’s lives,” Blake explained. “Hallelujah BBQ is our vocational rehab program.” 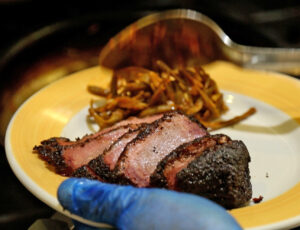 Blake practiced as a lawyer is the past but back in 1997, he found himself drawn to helping the deprived.  “We’ve got up to 190 beds. That’s 190 broken lives. And I get to be part of putting them back together and helping them become productive. The bottom line is this is a divine calling and God called me to basically quit law and help people who are homeless,” Blake went on.

Those hungry are welcome to a meal at Hallelujah BBQ. There are also plenty of people who are willing to pay for a meal.

Fred Johnson now works at Hallelujah BBQ but first came to Rescue Mission of El Paso in February of 2018 to get help. “I fell into drug addiction and ended up getting in trouble. I got busted and ended up in jail. And the federal judge actually asked, I asked him for help. And he said, ‘well, I’ll send you to a program at the Rescue Mission,’” Fred explained. 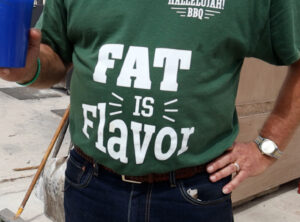 “Fred went through our drug and alcohol program. I believe he’s been clean about three years now. He’s reunited with his wife and his two kids, and he’s got his own apartment and his own car. That’s what it’s all about. That floats my boat,” said Blake.

David Myers has also been blessed by BBQ. “It saved my life, this place here, and I know it’s saved countless other lives,” David said.

Hallelujah BBQ has created a welcoming, loving environment that is projected to the people that are homeless who come to the door. When I asked Blake why he thinks God called him to this, he stated simply, “God fills the deficiencies I have. And really, if you want to boil my job description down, all I do is pray and listen, that’s it.”

Those prayers are being answered through the success of the smoked meats and those who go through the program. In fact, Hallelujah BBQ is getting a new home in a 100-year-old building that’s only a few feet away from the rescue mission. 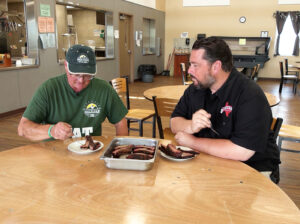 “If anybody is struggling with an addiction and needs help and they really want to change their life around, this is the place to come,” noted Fred.

“I wish we could do this a hundred times around Texas. That’s what we need. This is a model for what a shelter should be. And the food is better than anywhere else,” Blake said.

At Hallelujah BBQ, they’re remedying the feelings of being unwanted and unloved with the richness of soul and spirit, all while serving up some sensational sustenance seeped with holy smoke. This unique mission that serves up some great BBQ is well worth a stop on The Texas Bucket List!